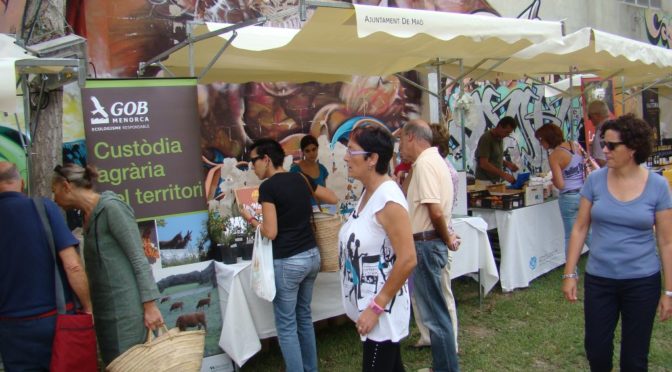 The countryside is a mosaic of fields which Menorca has conserved over millennia and is the key to conservation. The combination of the mosaic of cultivated fields, with spaces of wild vegetation, accompanied by large intersecting dry stone walls that also give provision to much animal life and vegetation, was one of the factors for the decisive declaration of the Island as a Reserve of the Biosphere.

Menorca is the result of the interaction of the human species, for at least 4000 years, with the primeval island that its first people found. It has not been a virgin area since then as it has been largely transformed by human hand. The countryside which we see today is the result of applied cultivation to nature.

The inherited activity of farming has altered the land most of all. Either for feeding flocks, for producing foods directly or by looking for resources from the woods, this agrarian management is responsible for the legacy which we have received. During the last forty years, the intensity of this management has been strongly compatible with the conservation of high biodiversity and so has shaped the countryside that gives pleasure to many people.

Human and animal cohabitation have been constricted for so long that now the large number of animals and plants we find depends to a large extent on the maintenance of an adequate agrarian management. Where there is responsible management, we find many insects and seeds which feed the small mammals and birds and they in turn contribute to maintain all the richness of the food web formed by wild life.

Even today, farming affects more than 70% of Menorcan land with the object of producing food. But it does not always keep to the values such as those cited above. Many farmers are just abandoning their work because they cannot find a way in which they can survive in an economic climate which has changed so much. When farming is left unmanaged on land such as ours, wild plants, bushes and trees suddenly appear, making the countryside more wooded and, also, agreeable to look at. The woods help to preserve the fertility of the land, but they do not give shelter to such a diversity of species which then become more homogeneous.

What sometimes happens is that in trying to find the largest and short term economic benefit, intensive farming practices take place. Large irrigation systems usually appear – using up water from the shrinking subterranean aquifers; pesticides are used – that poison the food chain. Intensive farming causes a loss to the countryside mosaic by making larger fields for cultivation; and a decrease in the wild life results.

So we need to keep agrarian activity but look for a method to maintain its management in such a way that it can be economically viable and which, at the same time is, not excessively intensive so losing sight of community benefits. The good news is that there are examples of farmers that have managed to find suitable places as well as a good methodology and now they can have a greater quality of life than before.

The network of agronatural farms of Menorca

The search for this ethical method of farming is the central object of the agreements for the care of the land that GOB signs with the farm producers. It has the aim of going on to create a network of agronatural farms that serves to work by example. It also aims to have the ability for the farmers to work together to guarantee that Menorca continues to have a living farming sector with the added value of environmental conservation.

This Land Stewardship Scheme comes after sufficient conversations with each farmer about his or her achievements and the confirmation of sharing a vision of the future that we want to follow. It is a pact of mutual help, where a plan of measures is agreed upon and where each party tries to make the most of every opportunity.

The Land Stewardship Scheme works to involve all the private representatives of sustainability. Owners and managers of the farms, current or potential, can involve themselves in responsible management of their land and follow the help from different sides of the community, according to the agreements. It deals with a methodology of coordination by means of following the voluntary agreements after a process of dialogue.

Conservation of the countryside, the positive effects on biodiversity and the environmental services derived from the farms with Land Stewardship agreements, translate into a valuable community recognition, by the promotion of different products, in voluntary help, the training and exchange of experiences, new commercial systems … that is to say, in many social alliances, which can be joined with the public initiatives to succeed in regaining the maintenance of the coastal farming areas.

The final object is to find the consequences of a social sustainability, environmental and economic, for these farming activities, in a way that they can be sustained by their own market forces.

What challenges confront us?

What strategies have we set out?