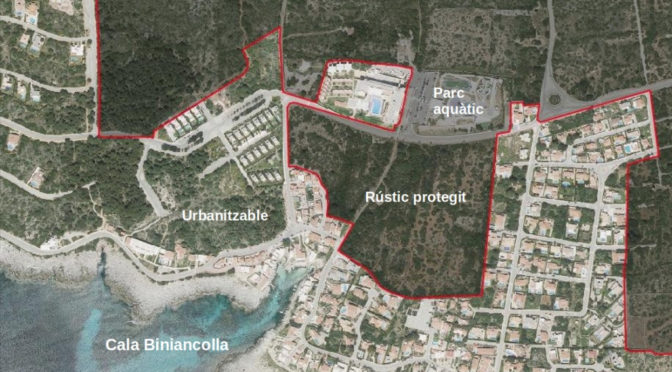 Earlier in the past month, there was an interview in the local press with the president of the hotels association of Menorca. One of the notable proposals made by this spokesperson was to enlarge coastal urbanisations, starting by removing land protection. GOB considers that this proposal is outdated, coming from the past century, and could be hiding personal interests.

Menorca still has large areas of land where building could be continued along the coast. Examples are at Coves Noves, Son Parc, Torre-solí, the coast of Sant Lluís or Punta Grossa, that have a forecast for building on thousands of square metres providing for thousands of new tourist places with new hotels and villas. The president of the hotels association wants to remove planning protection from surrounding rural land in order to make it available for complementary activities. If this is a vision of the future, it is urgent that other economic voices are heard expressing more sensitive views.

In GOB’s opinion, the last thing that Menorca needs is to sacrifice rural land for the sake of increasing coastal urbanisation. On the contrary, measures must be taken to stop a large part of the forecast growth of urban areas because of planning permissions inherited from the 70s and 80s. There should be a system of review, to lower the impact on the landscape of the largest hotels, and demand that new building must incorporate the maximum environmental parameters requested by Europe, where energy consumption is reduced to nearly zero, as well as water consumption and non-natural materials.

What the president of ASHOME is asking, in fact, is to copy what has been done with the aquatic park in Biniancolla. The case was exactly like that. At an urbanization with lots of building land pending constructions, authorization was given for complete transformation of a large plot of rural protected land to make an aquatic park.

The operation was justified saying that this park would be of use out of season. Most people did not think so nor did the judges. Judgements and court rulings so far say the operation was a violation of the law. It should be noted that around the waterpark in Biniancolla there is more land, currently protected, that is owned by the same company (see the attached illustration).

The interview proved that some financiers are like aircraft carriers showing inertia in changing course and find it difficult to reorient prescribing the same actions from 50 years ago.

The way out of the economic crisis caused by the pandemic cannot be to return to land planning of the years when the urbanizations were growing. Not to see how things have changed radically is the road to ruin. The Menorca of the 21st Century should be based on economic diversification, on activities that consider environmental sustainability, on enhancing and putting into practice the image of conservation of the land that has made this island special.

The 21st century also needs financiers who negotiate with an updated perspective. There are some in Menorca but they are not the usual spokespersons.