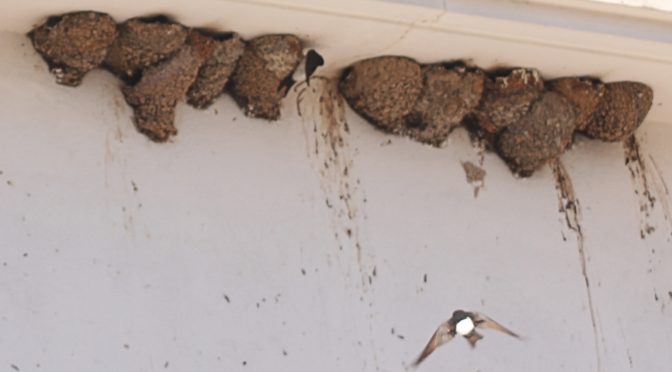 The house martin or town swallow (Delichon urbicum) was frequently a neighbour in our towns. Their nests of clay clinging to roofs in the eaves formed part of the urban landscape. These days, as has been found from the numbers collected each year by SOM (the Ornitholigcal Society of Menorca), we are getting rid of these house martins from built up areas obliging them to build their nests in industrial estates or in urbanizations. Only Ferreries keeps a significant number of nests, though there is a tendency towards reducing the quota.

The house martin is a species of small swallow coloured black and blue, with its front, neck and rump in white. The contrast, of the black and white colours especially on the shoulder, make it very easy to distinguish the birds. The tail is low but short, a difference between the common swallow and that of country species which are much larger and, furthermore, have red spots on the face. The flights of the country swallows are very agile allowing them to catch all types of insects in the air, and they go much higher than the common house martin.

Swallows are migratory. They come from the African sub-Sahara to breed in Europe at the beginning of spring. In Menorca they breed exclusively in town buildings and normally in groups. The birds pair for life and each year use the same nests, which they make with mud balls kneaded together with their saliva. The nests cling tightly to the exterior eaves of houses and the birds leave only a very small hole as an entrance on the top of them. The interior is covered with feathers, hair and dry herbs. The nests of a country swallows are quite different having a shape like an open cup and they tend to breed in the interior of country houses and buildings.

The swallows generally have two laying seasons each year of four or five eggs. The parents take it in turns to sit on the eggs until they are hatched out after about 15 days. The chicks stay in the nest for approximately a month and then they go out, following their parents, for another week. At the end of the summer it is typical to see concentrations of swallows on electric and telephone wires, preparing for their return to Africa, usually in September and October.

Swallows feed on the wing, on flies, mosquitos, and other insects. It has been calculated that a swallow catches some 55 kg of insects per year. That is why they are important controllers of plagues. They have few predators as they are so difficult to capture while they are flying. The main dangers are the threats from intensive farming using many pesticides and the difficulty in establishing colonies for breeding. New ways of building use materials on which it is difficult to site the nests. Also, in many villages it is difficult to find areas with mud from where they can take the materials for building their nests.

The nests of house martins give certain problems to some neighbourhoods. They certainly dirty the walls, but there are ways of avoiding this. Knowing how to live with other species, such as swallows, denotes a cultural sensitivity and positive environment which says a great deal about the towns which have known to maintain important colonies of nests. In fact, swallow nests are protected by law and it is not permitted to remove them even when they are unoccupied.

Food: Insectivore. It hunts for insects on the wing.

Conservation status: They are catalogued as a species of “minor concern” by the UICN, although the European population is in decline. The total population in Menorca is maintained, though it has reduced in the interior of many towns.

Legal Protection: protected at a European level under the Bern Convention. At State level by RD 139/2011