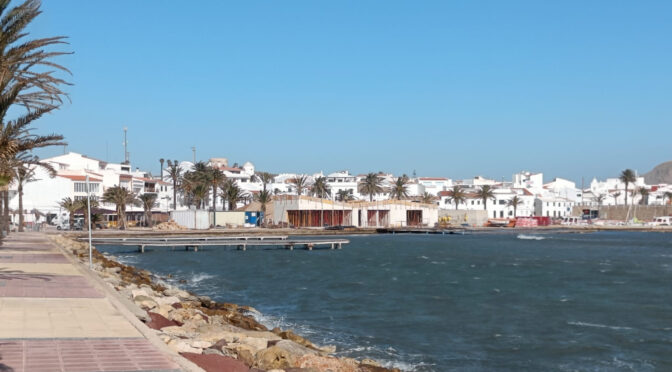 GOB has worked and continues to work on reducing and controlling the impacts caused by the remodelling of the Port of Fornells. It has focussed on various features that in our opinion are very important at an environmental level. Allegations, resources, meetings and opinion notes have been used, but no time has been dedicated to the proposed project of a new building in the urban area because there were already so many people analysing this intervention.

During the many months that the project of Fornells has been monitored, the whole town talked about the building being designated to serve as new port offices. The people talking about it included the businesses, the neighbours, the political parties, the local Council, the Es Mercadal Town Hall…Thinking that this issue was well covered, it was decided to take action over the many other expected impacts that were not part of the commentary.

So, the focus was on the arrangement of pontoons in order to reduce their impact on the existing Posidonia fields; on an exhaustive control of toxic products (hydrocarbons, oils, paints etc.,) that usually enter the sea from   ground level where the maintenance of boats is carried out; on the clarity of the toxicity of dredged sludge; on the contradiction of building in green areas; on the beaconing of areas that exclude navigation;  and on the nautical capacity of the nearby environment.

GOB filed an appeal against the bidding for works that guarantee compliance with the conditions imposed by the Environmental Commission but were not reflected in the tender. The majority of the questions have been modified and incorporated. Some are still subject to current processing.

That is why it is surprising that the building, which was so controversial, has gone ahead as planned. It must be questioned if anyone carried out the appropriate legal procedures on claims or resources. Or, if the established institutions held meetings – like the various ones that GOB had with the Ports Authority to deal with the above mentioned subjects – to analyse the alternatives of the visual impact of a new building in the area that used to be occupied by the old Es Pla restaurant.

Any initiative to modernise an area on the port implies a considerable list of environmental issues. Making a design that is for a conservation area is never easy and a toll is often paid. However, the regulatory mechanisms should be used to learn how to proceed in a more balanced way.