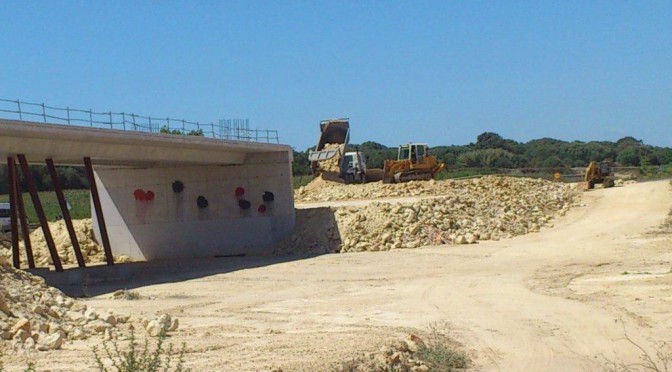 GOB Menorca is the association which promotes responsible ecological management for the island. It brings to the attention of the public proposals which could adversely affect its integrity and character upsetting the island’s ecology and its economic viability. Many thousands of people have been brought together to protest against the disproportionate works proposed for the main road between Mahon and Ciutadella. Once the works started, many more people clamoured to have them halted, to think again before the island’s uniqueness was lost and before millions of euros were misspent on megaroundabouts quite out of keeping for a small island.

On 17 September, GOB was delighted to pass on the result of the efforts of the newly elected Consell whose will has been to reconsider the planning of the road works and to try and rescue their deliterious impact. The Council announced that morning that the Ministerio de Fomento (the Spanish Ministry of Development reponsible for public works) had agreed to extend the time allowed for the road improvements and which, in effect, gave a new framework within which the island could redesign the project and avoid unnecessary destruction.

To get to this point has been a long and difficult process. It is, therefore, very good news for the many people who joined together to determinedly and carefully argue the need to keep the countryside unspoilt between the opposite ends of the island by aggressive road construction. They promoted only what is essential for road safety improvements and wanted to remind the politicians not to jeopardise the important UNESCO honorific that Menorca proudly holds of the Reserve of the Biosphere.

New information now available shows that the union of constructors of the road had put forward their claim for an extra 38 per cent on their estimate of costs only three weeks after the work started. It was the beginning of the slow down of the construction and with two months before the period allowed for finishing the road, just 20 per cent of the work had been accomplished.

Now, the wish is for real progress. GOB is grateful for all the support that has been given, the walks, the actions taken and the postive effect that has resulted.

With Christmas coming up the GOB shop in the market Cloisters of Carmen in Mahon will be worth a visit. It has a variety of books many with beautiful photographs explaining the countryside of Menorca, its walks, its birds, its flowers, its geology. There are gift items such as prints of the light houses, or toys and books for children. In addition, there are local farm products from chutneys to cheese and wine. These are from those farms which are part of the Land Stewardship Scheme, promoting environmentally responsible and sustainable management.

The office is situated in a converted mill. Here you can have advice and information on its numerous activities including on injured wild animals which will need hospitalization in Ciutadella. It sells the guide books and gift items that are also available in the GOB shop and there is usually an exhibition on some current environmental interest.

This is the nursery garden specialising in indegenous plants which are available to buy and which need far less water than exotics. Here you can have gardening advice, advice for installing green filtres for recycling household water waste, advice on planting and seed collection.

Address: Es Viver is near Mestral. This is on the road which joins the airport to the Mahon-Ciutadella Road.

www.gobmenorca.com explains in detail all that GOB does. Do not rely on the automatic translation into English. It has very bad quality.