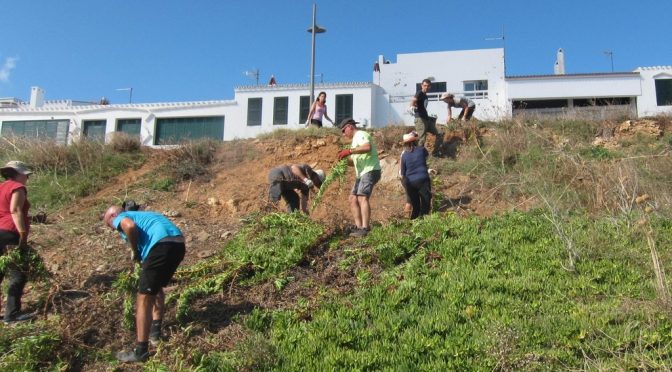 Due to holidays, notices over the last two weeks have not been published. Here is a resumé of some.

Despite Melia Hotels having promised to demolish some of the higher levels of the hotels rather than modernising them, they have presented a project maintaining the same number of floors. If they get the licence it will not eliminate anything from the previous authorisation.

GOB found many defects with the project applications and will raise them now that they have been able to consult new documentation. Modernising the hotels with the present heights, as they wish to do, would signify 50 more years of life to buildings which should never have had permission in the first place. By legal avenues, work is being done to try to stop them.

A container was filled to the top with this invasive plant sometimes known as patata frita. It grows over and covers species along the rocky coastal areas which are becoming rare world-wide and therefore in need of conservation.

The invasive plant Aptenia, usually grown in private gardens, was also found and the participants were able to observe them in plant pots in neighbouring properties.

Sadly, there is a lack of awareness of the harmful effects these plants can have on the natural environment when they spread from gardens and colonise very fragile environments like those on the rocky coast and in the dunes.

Parallel with this volunteer day, an activity was held at the school in Fornells with the primary and infant classes, on the danger of invasive plants in the garden and the benefits of the use of endemic plants. So 16 aromatic endemic plants were bedded out in the school garden.

These days are part of the programme Beaches and Volunteers supported by the Biodiversity Foundation and the Ministry for Ecology.

The Club Vidalba and The Orfeó Mahonès have both pledged to join the “2020 promise” to use only reusable materials or biodegradable for the celebrations.

The GOB campaign aims to eliminate from Menorca by 2020 the maximum amount of non reusable plastic endangering the marine environment.