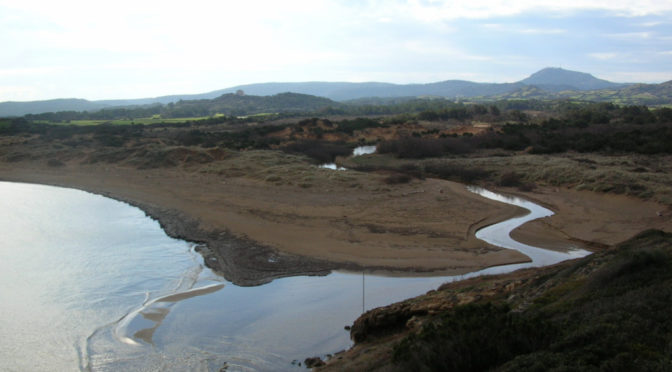 The approval of the Law of the Coast on 1988 (Ley de Costas) defined which areas of the shore would be a public domain. That is to say, public property, in this case, administered by the State. Within this definition are included the sand and the dune systems. In Menorca, the law saved some iconic areas that were seriously threatened by the extraction of sand for construction works.

The urbanising fever of the coastline wreaked havoc, especially in the seventies and eighties. So much building needed a lot of material and some properties that were along the sandy seashore made big business out of exploiting the huge dunes that, historically, had formed along different beaches.

The high sandy dunes of Son Saura in the north, that children climbed with difficulty to then throw themselves down to the bottom without danger, are now a large part of the walls of the apartments and the base of the golf course.

Likewise, a part of the dunes at Es Grau fed the start of the urbanisation, later stopped, and its golf course. After some years, because of public initiative, tamarinds were planted and mud used in order to reconstruct the damaged beach.

Hundreds of lorries came each month from Cavalleria, Tirant or La Vall, where they loaded up the gift of the ready-made material. Only the colonies of precious beehives and the birds that bred there dared to protest against the excavators. And, some ecologists recorded that the extractions were being done without license.

A long lasting case that ended with the intervention of the Environmental Prosecutor, was that of Cala Tirant. The sand that shaped the large dune system was considered to be of the highest quality, so that those involved in the business put it about that the Menorcan construction industry was dependant on this raw material.

This belief was proclaimed with such conviction that it was accepted at various Municipal plenary sessions and although the activity did not have any legal protection, they did not want it stopped and hold back the economy. The threat of a conviction for an ecological crime helped them to come to a decision. Many years later, the public recognised they had been deceived because the exploitation of the sand stopped and nothing happened to the Menorcan economy.

Weak theories, such as that of the sand from Tirant, seem to be widespread, in other sectors, where they repeatedly fail, but keep appearing intermittently. A good example is the usual arguments made by shopkeepers when vehicle restrictions are proposed. Very quickly, a group announces an economic apocalypse, until the action in favour of pedestrians is put into practice and everything results in success.

Similar behaviour is shown when people proclaim that the Menorcan countryside is finished and that there ought to be maximum facilities available for making other economic activities in the rural environment. Generally, this signifies being able to carry out more urban operations, or moving activities thought suitable for urban or industrial zones to the countryside. However, the reality is that the island’s farms have diversified and increased their productivity, determined the prices and they manage to sell everything.

Perhaps the problem is not the countryside, but the manner of exploitation that cannot compete by price – the same as happened with shoes and jewellery. Sometimes, it is necessary to put aside worrying about change, look at what the market is demanding and what it can expect in the future, and sail towards securer ports.

Some experts point out that one of the main challenges we will have to face as a society in the next few years is the reduction of available cheap oil in the market. In fact, large oil companies are abandoning extraction investment already because crude oil costs are unattractive. Therefore, there is much sense in some of the requirements of Europe, such as demanding maximum energy efficiency in buildings.

Despite the advance of renewables, it is still valid to say that the most ecological kilowatt is the one that is not consumed. Leisure areas are more attractive without vehicles. We need to help the countryside to provide us with healthy food at affordable prices – and Tirant is now a beach that has recovered a large part of its biodiversity.

Oh, and despite what is said, the car park near the Son Bou beach has been in the public domain for decades.

(Article published by Miquel Camps, as the coordinator of land policy, in the Menorca Diario of 3 May 2021.)