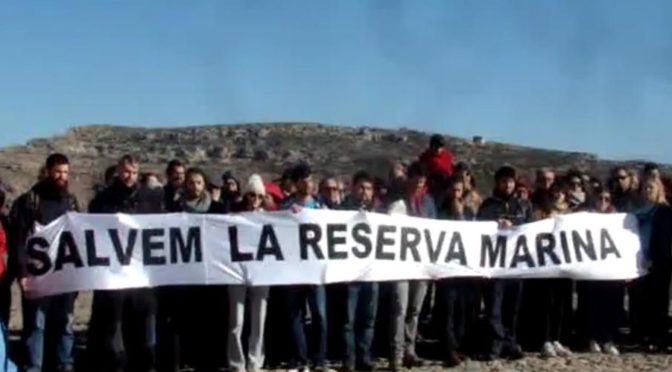 Menorquins pel territori (Menorcans for the Island, a group of young Menorcans in Barcelona) and GOB have maintained meetings with the relevant public institutions to insist on the necessity of greater vigilance of illegal fishing of the Marine Reserve to the north of Menorca. There are good prospects in the short term.

At the demonstration which the two associations organised for last January 7 in Fornells, a manifesto was read out which asked for greater coordination between the different surveillance groups that can operate from Menorca. This has been the theme of the meetings with the Island´s Representative to the Central Government and the Councillor who is responsible for Environment from the Island`s Local Government.

The problem of illegal fishing in the protected marine zone has been brought to the attention of the public bodies responsible who have been asked to optimise their available resources and join together for greater efficiency. This seems to be a possibility.

The Guardia Civil can follow four lines of action. They can expect help with patrolling from Seprona (Servicio de Protección de la Naturaleza), by the usual surveillance vehicles in urbanizations and the countryside, as well as from periodic visits by the marine Guardia Civil –based in Mallorca but serving all of the Balearic islands – and also from helicopters.

At the meeting with the Consell Insular, there were some monitors of the Marine Reserve, an inspector of fishing, and some representatives of the administration department, as well as the Councillor of Menorca´s Island government.

Menorquins pel Territori explained that in the Canary Islands drones are operated for monitoring the Marine Reserve, a possibility which will also be studied in Menorca for their use at times when access to some areas is awkward.

In addition, GOB registered some days ago a formal consultation petition in order to find out what disciplinary proceedings there have been in the last few years in the Marine Reserve. The point of this is to ascertain what proceedings came to finalisation and what sanctions that are imposed are real disincentives considering the large financial gains which some of the illegal activities can provide.

It is hoped that by the beginning of April it will be possible to have a meeting with the Commission for the Monitoring of the Reserve (Comisión de Seguimiento de la Reserva) an organisation created some years ago but which has not convened for some time. It is also expected that a new study of the current situation concerning the importance of the sea will be made in the summer.