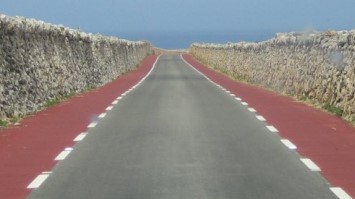 The news of works to enlarge the parking at Punta Nati has caught many people by surprise. This is especially so because Menorca has already learned from sufficient existing data on the subject.

For some years and in the tourist season, it has been fashionable to watch sunsets from close to the lighthouses. Favàritx and especially Cavalleria and Punta Nati, allow enjoyment of a natural spectacle from a natural environment made special due to the presence of an iconic lighthouse. As with matters that form a tendency in the summer, this translates into an accumulation of people and vehicles, much higher than the capacity of the natural spaces or of the access roads to them.

It is an effect very similar to that experienced on certain unspoilt beaches, where demand far exceeds the possibility of absorbing it. A few years ago, the solution for enlarging parking areas was seen as a mistake because this further increased the demand.

The increases made in 2013 of the parking lots in Macarella and Cala En Turqueta in addition to being irregular, multiplied the overcrowding on the beaches and saturated them equally. They had to be removed.

The same is still happening at Cala Mitjana, where a large car park made at that time causes human pressure on the beach to be seven times higher than it should be considering its size. Nor has this influenced Cala Galdana to reduce its parking, as the Ciutadella Ayuntamiento foresees large remodelling to gain more spaces for private vehicles.

To curb the problems of collapse in Macarella and Favaritx, it was finally decided to close them to cars in the high season and provide collective transport. Despite the voices that always preach the end of the world when measures like these are taken, the reality is that the situation has greatly improved and the experience of those who visit is significantly more rewarding than before.

Returning to Punta Nati, this is a place only 4 kms from the centre of Ciutadella. A perfect distance to cycle or to walk. Or make the most of public transport during July and August, which works every afternoon before and after sunset.

In this way, Menorca needs to make a difference and really opt for sustainability parameters. The island has many possibilities in matters of mobility and it ought to make the most of improving situations and not repeat actions that feed a dead end model.

GOB has asked to consult the file for parking enlargements to analyse the processing and characteristics.