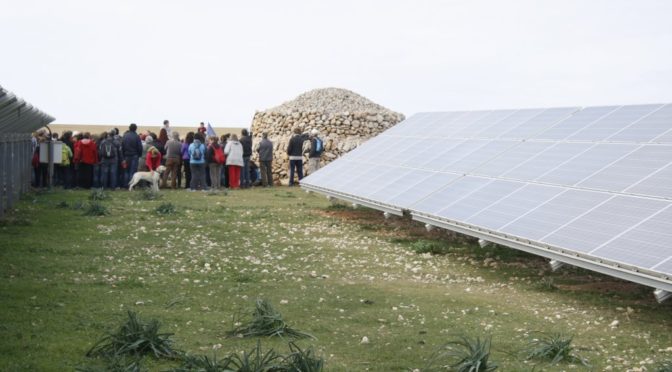 The enlargement of the Son Salomó solar park, to the north of Ciutadella, brings into focus the debate on renewable energies and the use of land. It is an issue which is never easy to resolve but which must be confronted sensitively and from a responsible point of view.

This solar park was a project which was approved in the last term of office of the previous government, and was passed unnoticed and without dispute. It relates to a very large scheme of the order of 173 hectares which could produce 20% of the electricity for Menorca. At the moment, the island obtains 3% of its electricity from renewables and 97% from fossil fuels.

Now there is an argument over the use of the land where it is sited. It has arisen because of a facility that would signify an important environmental advance.

The need to create a significantly higher percentage of energy from renewable sources is indisputable for our association. The effect of fossil fuel energy on climate change has the consensus of the scientific world. The consequences of greenhouse warming are much more rapid than forecast. They seriously prejudice our economy, affecting farming, water reserves and tourism.

It will be necessary to use land in the countryside in order to make a significant amount of electricity produced from renewable sources, using even the most up to date technology.

The alternative of property owners choosing to use their roofs should be promoted. However, the amount of electricity produced would be nominal. Let us imagine a successful campaign that could convince a thousand property owners to put 20 solar panels each on their roofs. After a thousand successful plans and applications, there would be approximately the same amount of electricity as is now produced at the solar park of Son Salomó, which is only 1% of the total electricity we consume.

Wind power, without rejecting it, causes more argument because on an island like Menorca, the wind turbines can be seen from so many points. Even more problematic are thermosolar power plants which require large areas with highly visible installations.

Bearing in mind these considerations, GOB has been working to try to reduce the expansion of Son Salomó without decreasing the planned production of electricity.

Our association believes that it could be possible to cut back the area of Son Salomó by about 30% based on optimizing the available technology and concentrating this reduction in the zones of least ethnologic interest. Although a large intervention will be necessary it must not destroy the island’s heritage and the land must be left ensuring its continued preservation for hundreds of years more.

The commitment is to make certain that land which accommodates the panels is not transformed into an industrial area, that the state of the ground is not altered, that the network of dry walls is respected, that historical ruins are restored, and that the solar park is not seen from the most customarily used routes. The park will be installed in such a way that it can be taken away without altering the land since solar panels, unlike buildings, are not built with any foundations.

We believe that the renewable energy challenge will need to borrow land but not sacrifice it. If later on we have learnt how to consume less or we have cleaner and more efficient technologies, this land might not be needed and would be returned in an improved state. We are opposed to using more oil and gas but we want to use renewable energies with care with the least impact on the envirnoment.

This debate should not only be about the enlargement of Son Salomó. So long as the new central government does not increase its war against renewable energies, making their production unfeasible, we could have 20% alternative energy in Menorca. However, that still leaves 80% taken from fossil fuels.

We are hopeful for the present and the future that these discussions will produce sensible and conclusive criteria.