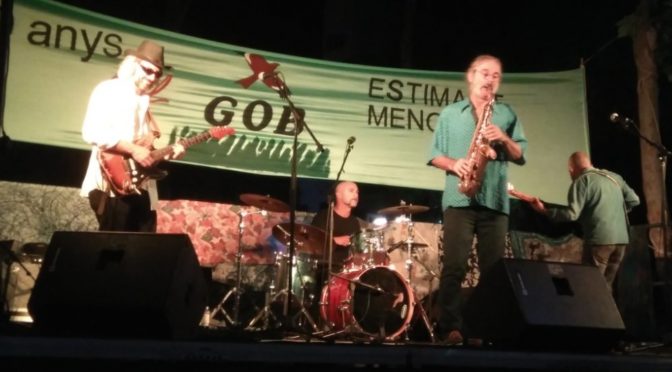 The beautiful Es Freginal Park in Mahon, ornamented with placards for the different stalls, was the setting for a celebration where people were able to go all evening.

There were various tables laid out with different products (this year’s Tshirt, books, story books…) there were counters for cooking ecologically grown foods, or for supplying returnable plastic cups, and all were attracting you to explore the area. Everything was permeated by the musical activities providing a background to the whole scene.

The children’s theatre of Teatre de Xoc, based on children’s stories edited and written for GOB, were accompanied by the melodies with Menorcan rhythms of Cala Joia. Afterwards, the Estraperlo group presented folk songs.

Later, some videos were shown of some of the people who would have liked to add their congratulations but could not be present, such as the economist Guillem López or the singer Joan Manuel Serrat.

The president of GOB Menorca, Jaume Obrador, read a small speech recording the essence of the association and the challenges ahead.

Afterwards, the voice of Gerard Quintana, accompanied on the piano by Ricard Sohn and the help of the delightful backing group, gave a repertoire both intimate and local.

The fiesta closed with the unforgettable rhythms and musical virtuosity of Gonzo and Gusano’s Blues.

During the evening, there were many conversations between people who remembered the protests, activities, the summer camps, or the tense situations and victories that are still celebrated. As the President said, we need more people to take on working on behalf of the environment.

During the summer, there will be more celebration events, though much smaller, and the information will be sent to you.