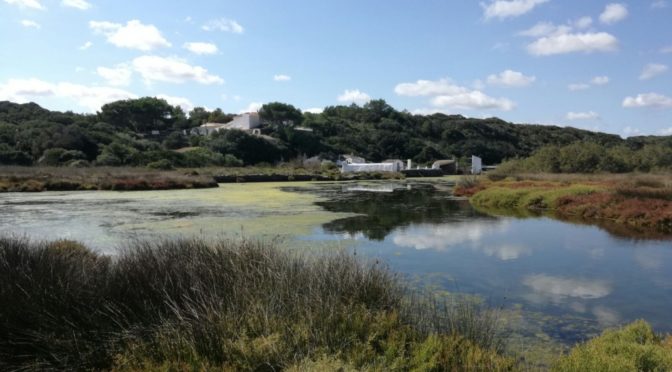 Sending purified water to the lagoon, avoiding the use of lead shot, being able to feed carrion birds or leaving a part of the marine area for fishing only with creel, are some of the proposals that GOB has given recently for a Plan to Restore the Use and Management (Pla Rector d’Ús i Gestió (PRUG)) of the Albufera des Grau natural park. It will be a means of processing the management of a better relationship between human activities and a protected area.

One of the most worrying questions about the future of the Albufera des Grau is the scant amount of freshwater (non-brackish) it has. In the 70s and 80s water was collected and sent to supply urbanizations or to create new irrigation systems. There were water supplies that, historically, were contributing to the freshwater of the lagoon but then became exhausted. Since then, the Albufera has suffered from a serious scarcity of water.

For some years the team working for the natural park has to watch that the lagoon does not dry up excessively in the summer. Because of this, they allow water to come in from the sea. However, the increase of salinity is detrimental to the organisms that live and eat in freshwater. GOB believes that a project would be possible to bring purified water to the lagoon during the summer. It would be produced by a new water purification plant coming soon for the urbanizations of the north.

Water from urbanizations is from domestic use and without any industrial contamination. The largest quantity of water generated would be in the summer precisely when it is most needed in the Albufera. The project would incorporate a pump (perhaps paid for by the ecotax) making it possible to bring water to the top of the stream of Santa Catalina the remainder arriving by gravity. This is an option to study for finding a very clear solution for the future of this area so emblematic of Menorca.

Also an exhaustive control of the management of slurry is called for because the lagoon has an excess of nitrates. It is proposed that inspections should be carried out to ascertain that all slurry pits are kept separate from rain water collection (and to avoid slurry overflowing into the environment during episodes of heavy rain) and that any waste sent into ditches and streams be considered a serious infraction of the law.

Included are other points for consideration such as how to stop the use of lead shot in the park, or the hunting of thrushes with shotguns (a practice which releases the most number of shots per hunter); how to define in each cattle farm a space where the cadavers can be left to feed the carrion birds; what things such as asphalt on the roads, or the change of use of buildings, need to have a mandatory report. And that cleaning of streams be made using ecological criteria so avoiding the destruction of the ecosystems within them.

Likewise, there are proposals for the marine environment for the sea from Addaia to Es Grau. GOB asks that this area be limited exclusively for professional fishing with fish traps (to recover this art which is much more selective than using nets). Also that an area is reserved to help the recuperation of some species.

The written document that has been presented suggests the need for making suitable arrangements for the promotion of environmental education, as well as the observation of the environment and other similar tasks to take place within the ambit of the Park, which is, after all, the nucleus of the Reserve of the Biosphere.