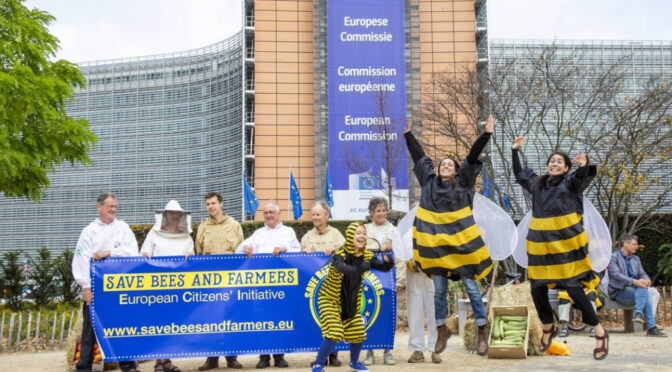 The 20 September is the deadline for signing this Iniciativa Ciudadana Europea (European Citizens’ Initiative) that demands the protection of pollinators. You can do this on the following link: https://www.savebeesandfarmers.eu/eng/

A group of people who have been joined by more than 200 organisations throughout Europe – amongst them being GOB Menorca – started an ICE to ask the European Commission to gradually eliminate synthetic pesticides before 2035, restore biodiversity in farming areas and help farmers to make the transition to sustainability.

The Iniciativa Ciudadana Europea (European Citizens’ Initiative) is a legal European Union mechanism for active participation in the development of European laws and policies. A million signatures are required to process an ICE. Now there are over 750,000 signatures for this ICE and during this last month, it is important to make the last sprint to collect the shortfall. So, we invite everyone to sign and spread the word to all your contacts to do the same.

The European Commission established the reduction of 50% of pesticides within the framework of the Greenpact. The pesticide producing industry, its allies in the European Parliament and some national governments are jeopardizing this historic objective. The motive for raising an ICE is to ensure that the rights to our health and that of the planet supersede these economic lobbies.

The three proposals of this ICE are:

Since it is a legal document, signing an ICE will require data such as your ID and date of birth. These must be completed to give legal validity to your signature that will be recognised in the counting. Your name must be exactly as it is on your identity card.

We urge you to do this and make September the month when biodiversity and health supersede the economic interests of the few.