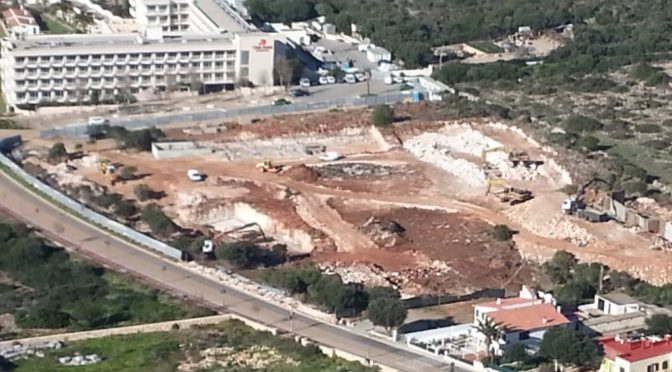 The case of the aquatic park at Biniancolla has just had a new episode written in which the Supreme Court refuses to review the sentence that declared it illegal. The facility was created in the middle of strong opposition because it seemed to have made a deal where one company was favoured discriminating against others.

In 2012, Menorca found itself, like nearly all the western world, affected by the banking crisis of 2008. It had to cope with the international economic problem, but here an opportunity was taken to say that some of its economic problems arose because the island´s building permissions were being over protective. So a modification on Planning Permission was initiated through the Norma Territorial Transtòria (Transitional Land Regulations).

Such a setback in land protection had, and still has, some worrying effects. However, what generated the most debate was the idea of installing a water park in the countryside in Biniancolla and, furthermore, on protected land. In its defence, the promoters, both private and public ones that wanted to give their support, said the park would help to promote out of season tourism.

When the project was opened to public scrutiny, GOB pointed to important inconsistencies. In the first place, GOB confirmed that there was no compliance with the legal obligation requiring that only equipment necessary for rural land itself can be placed on it. Aquatic parks are not essential for rural land and the most obvious proof is that other ones in Menorca are in urban areas.

It was also pointed out that the project claimed to extend the tourist season. Since this was an outdoor facility, GOB stated that this argument was invalid. They also drew attention to the forecast of an enormous consumption of water from the aquifer and that there were no alternatives for the use of water on nearby land being analysed.

However, the reality was much more prosaic. The cause was the promoter, a prominent representative of the hotel industry, who had a plot of land adjacent to the hotel and wanted to make the aqua park there. It did not matter that less than 100 metres away there were other plots of land that qualified for urbanisation and where he could have put the aqua park without subsequent litigation.

The problem is not the park itself (which because of complaints now functions using water form wells that are saline) but the decision to put it in a place where it should not be. Nevertheless, it would have to have been a very convincing commitment, because it was authorized, and, furthermore was exonerated of all the urban parameters that ruled in Menorca. The constructions were much higher than allowed and the amount of the plot of land used could be up to 4% but was authorized for 55%.

With these details, it is not strange that other companies saw favoured treatment and clearly unfair competition since they had tendered for urban land and with very different costs. Building went ahead and a long journey started through the courts. The first sentence declared it as manifestly illegal. Now the Supreme Court has said it is not reviewing the sentence. So, it is left to be resolved by an appeal presented in front of the Balearic Courts.

The aqua park of Biniancolla has not so far extended the tourist season, but it has used public money (from the Island Government and the Sant Lluí Town Council) for legal costs.

If the illegality is finally confirmed, the park will have to be demolished and the promoter will turn to the Island Government and the Sant Lluís Town Council. There will be further negotiations to claim thousands of euros for pulling down structures that should not have been granted permissions in the first place.