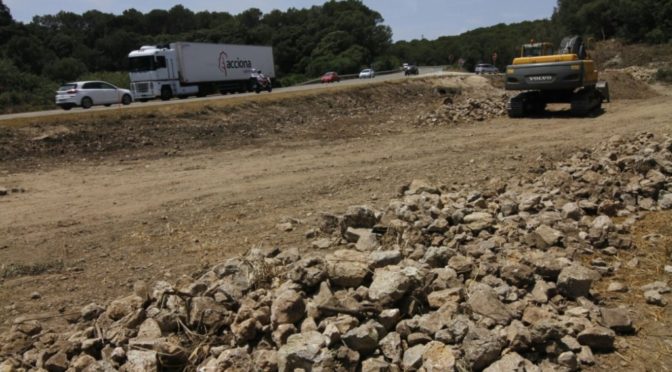 Works have started on the main road between Ferreries and Ciutadella. The movement of the excavators is now damaging the countryside. Despite the reductions which have been agreed further changes will occur in various areas.

The project to do road works in the western section of the main road, Me-1 was drawn up by the old government of the Consell Insular, but the project was not awarded. So this has allowed greater facility to revise the anticipated works and award a new project.

Much more labyrinthine is the process of the portion of the Mahon-Alaior road where the works were initiated and some of the highly controversial junctions with double level roundabouts were started. The contract was rescinded when it was made clear to the awarded company that there would be no extra money for which they were asking. It is very complicated for a public administration to undo procedures. Now a new design for this eastern section of the Me-1 has begun and will have to be looked at when it is finished.

In the meantime, it has been some days since the lower part of the Costa Nova has had a visit from machinery. It seems that, so as not to stop the traffic circulation during the summer months, the work of removing the asphalt will be left until the end of the season.

At the entrance to El Pilar, there are some more significant activities. To eliminate a subterranean way which was initially designed for access to the castle at the entrance to the coast, now vehicles that come from Ciutadella and wish to go to this well known tourist site have to pass through the El Pilar tunnel. The dimensions of the infrastructure do not allow two way traffic of wide vehicles, but it is not possible to enlarge the tunnel here because it is in a protected area. So, another tunnel is to be made for vehicles leaving the beach and going towards Ferreries.

This supposes that a series of measures will be applied to mitigate the impact. The adult holm oaks which are in the way of the new route will be transplanted – in the same way as was done with a large number of trees when the Ferreries by pass was built – and all of the section will be provided with pass ways for the wild animals.

The large structures of double level have been eliminated that, in the first place had been designed nearby the quarries of Son Sintes and before Es Tudons, but this does not mean that there will be no works done. The verges will be enlarged on each side, and there will be systems of direction change and regulations for entering and leaving.

Overall, the impact on the main road from Ferreries to Cuitadella, will be reduced by a third in respect to the first project. As a result, the transformation will be less than could have been but surely larger than we wished.