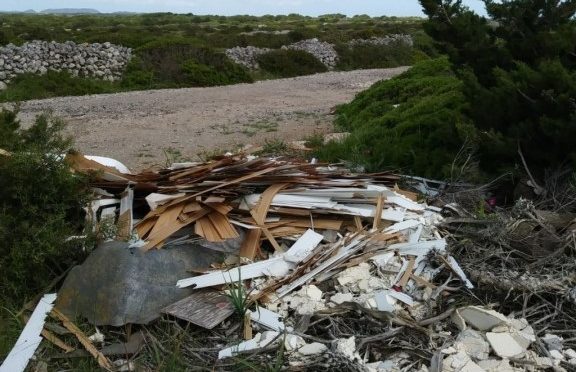 GOB is asking the public administrations of Menorca to increase vigilance and sanctions against the uncontrolled dumping of rubbish, “fly tipping”, taking place in the countryside as well as in towns.

These days new areas of fly tipping are being found on the Camí de Son Morell, in Ciutadella and for some time, others in Binisafúller, in Sant Lluís and on the Sa Boval road of Mahon as well as in Calescoves (Alaior). The list is long and includes the various points for rubbish in towns where some people leave all types dumped in a disorderly way.

It is difficult to understand this problem because the administrations have made available sufficient systems of collection and adequate places for leaving all types of rubbish. Collections of large quantities are made from houses; there are waste facilities in each town; Mestral works to make the most of recyclable items and there is a selection of places available for building rubbish.

We at GOB believe that no one can claim ignorance when they throw rubbish away in unsuitable places. So, now is the right time for a coordinated effort in identifying and penalising people in order to end these unacceptable practices which degrade the environment.

We are, therefore, asking for a coordinated response by the surveillance groups of the local police, the Guardia Civil and Environmental Agencies and that they increase monitoring of fly tipping not only in the countryside (generally along roads with little traffic) but also in town and urbanisations. If necessary, plain clothes police could help increase the number of inspections so that the culprits can be found and given heavy penalties which would work as important disincentives.