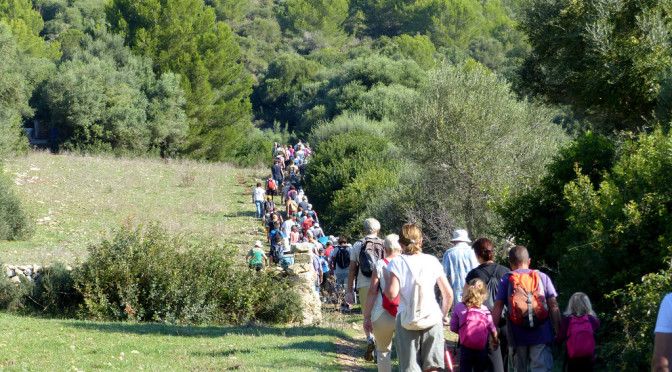 There was a good response from the public for a walk organised by GOB on a sunny Sunday on 4 October to visit a restored water cistern. 120 people gathered at the meeting place, at the entrance of Son Bou. The walk started along the Cami de Cavalls going through the urbanization towards the countryside along Torre-soli and soon turning off for the private road of Daia Vell, which on Sunday was opened for us.

The Charolais cows looked curiously at the advancing crowd that was also searching for a bit of shade from the wild olive trees along the path because the humidity combined with the sun provoked a sultryness making it difficult to climb the hill.

The surrounding woodland has grown up without hindrance over a long time between the ancient fencing and climbs up the hill so becoming a part of the landscape found between the two gulleys of Es Bec and Son Boter which emerge in the fields around Son Bou.

The track arrives at Daia Vell, which has benefited from the Asociaciόn Leader of Menorca (which invests in countryside development) for the renovation of water cisterns. It deals with farms of considerable historic and heritage importance making use of systems to collect rain water, and given the difficulty in finding well water when the farm is high up and surrounded by gulleys.

The cistern  we saw that day has been renovated and has a capacity of 80,000 litres. It makes use also of the rainwater from the roof of the cattle shed next to it, as well as that which collects from the threshing floor. Canals of sandstone have been conserved and ramps have been installed in the drinking troughs for the accessibility of wild animals. Menorca has hundreds of cisternas which could be renovated with very little investment. Most of them have been abandoned in the last forty years.

After the explanations and a small time for rest, the walk continued on to the north passing Santa Catalina, Rafal Fort y Es Bec Vell which were some of the beautiful places we saw, as well as having some wonderful views of the nearby gulleys. We arrived at the Migjorn road about 1.30 pm. The services of the ordered buses returned everyone to the point of departure after a morning both interesting and healthy.