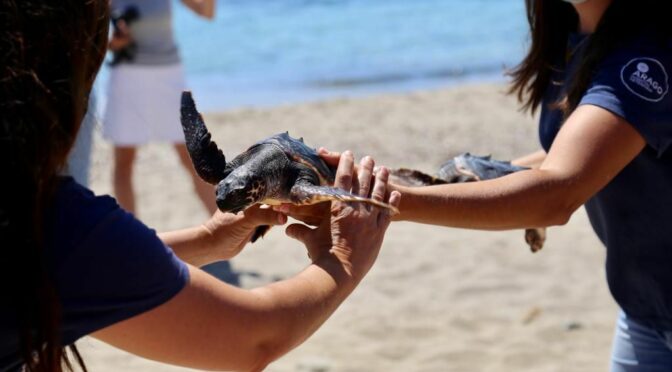 On 1 July, 47 marine turtles born in Sa Mesquida in August 2020 were released. Both private and public groups participated and were involved in the laying, incubation and the development of the hatchlings, but importantly, was the participation of the volunteers who for twenty days and nights watched over the nest.

A little over a year ago, a marine turtle (Caretta caretta) decided to lay its eggs on a beach in Menorca, but this was just the start of a long journey.

Owing to the conditions of the beach, the eggs had to be taken to another location, at Sa Mesquida beach, where its size and colour were more suitable for the development of the embryo turtles. However, techniques were required to help raise the temperature of the nest.

The nesting period is 45 days and 60 volunteers from four different groups (OBSAM, Per la Mar Viva, Menorca Preservation and GOB Menorca) guarded the nest for 24 hours per day. These volunteers were watching patiently for twelve days and, at last, on the thirteenth day, the first turtle emerged. It is the first documented birth of a marine turtle on a Balearic beach. For the following five days, more hatchlings began to emerge from the nest.

These new born turtles then began on a programme called “Head Starting” where they are cared for and moblised in different specialised centres to try and maximise their survival possibilities. Only one in ten marine turtles survive their first year of life. Once the animals reach an adequate weight and size, they are taken to the beach where they first saw light, and released.

The attached video is dedicated to all those groups and professionals that have made possible the liberation of 47 turtles, but especially to the volunteers who guarded the nest during the long night- time hours or the suffocating hours of the day and without whom none of this would have been possible.