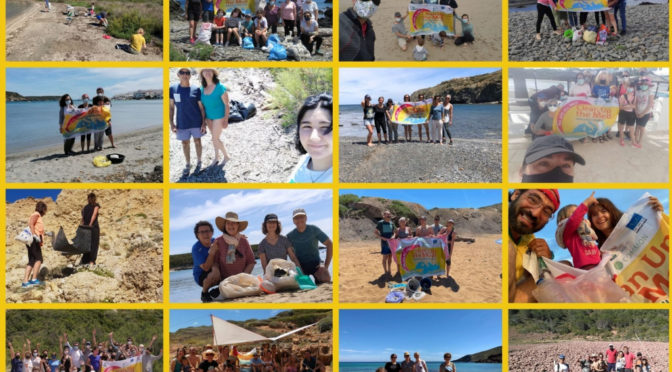 A total of 35 groups in Menorca, with 273 people, came together in May for the European Days of “Clean Up The Med”. The goal was to find and collect microplastics, which are so difficult to single out. Even so, some groups collected more than 46 kg of waste that was found in their adopted section with a total of 245 kg jointly in one day.

“Clean Up The Med” days have taken place since 1995 and the initiative is now considered the most important environmental event in the Mediterranean. The aim is, through the participation of the public from all the countries with coasts along our sea to become aware of the problem of waste in the sea and the necessity to conserve the environment.

In Menorca, the programme adopting sections of the coast is running all year round. Although the groups are autonomous and free to choose their own dates for their activities, GOB proposed a collective day with each group at its section to try to energize and enthuse less active groups. The idea coincided with participating in the 28th edition of “Clean Up The Med” which took place during the weekends of 15/16 and 29/30 May.

The programme for the adoption of sections of the Menorca coastline was launched nine months ago and interest continues to grow, though at a slower pace, each month. The initiative now has the commitment of nearly 1800 people and 117 sections adopted.

You can find more information on the programme on our main website which has a map showing the actual areas adopted .If you would like more information on adopting a beach, a cove or a part of the coast, you can complete our contact form and we will be in touch as soon as we are able.

The programme is supported by the Leader Pesca Programme, the Marilles Foundation and Colonya Caixa Pollença.