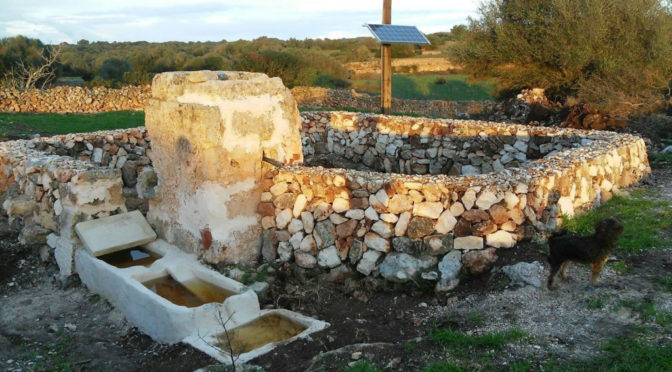 Some of the practices that are applied in Menorca to adapt farming to climate change will be explained this week at the National Environmental Congress taking place in Madrid (CONAMA).

The Land Stewardship Scheme, promoted by GOB for the Island, annually implements ways of combining agricultural economic viability with environmental conservation. Some of the initiatives have a direct application for preparing for the effects of the climate change forecast by the science community.

For example, pipes are installed to take advantage of annual rainwater falling on roofs of agricultural buildings that is then channeled to the cisterns and water tanks that are always built nearby. Many cubic metres are collected this way each year greatly decreasing the need for extraction from the aquifers.

It is probable that rainfall is going to change and become more intense increasing the difficulty of refilling underground reserves; however, it could be collected advantageously by the use of effective systems.

Every year, water tanks that were built in the middle of the countryside, making use of rocky areas, are renovated and now conserve fresh and clean water in very good conditions. In the Land Stewardship Scheme, drinking troughs are adapted so that, as well as cattle, all the wild life can drink in safety.

Each trough is fitted with an access ramp and with a hollow at ground level. This stops the animals drowning which happens frequently in the summer when the wild animals are desperately looking for water. In many places, solar panels are fitted so that the water systems can function automatically. Measures that give a double benefit: environmental and economic.

Explanations will be given for initiatives such as converting thickets to give shady areas for cattle in the summer; or the recovery of pastureland that is not needed for tilling but constitutes a European level priority habitat; or the promotion of the numerous local varieties of garden plants, fruit and vegetables that originate on the island and that, thanks to their adaptation, require little attention and are very resistant.

GOB representatives will take part in two sessions dedicated to analyzing the outlook on the climate change crisis, the possibilities for adaptation and strategies to be followed, especially in the context of an island.