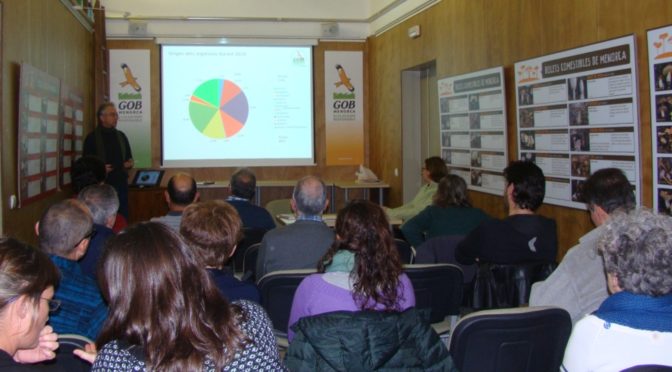 A general meeting of GOB Menorca members on 21 December, approved the resumé of activities of 2016, the budget for 2017, and the composition of the new Board of Directors. This next year will be the 40th anniversary of the creation of GOB Menorca, and it will be marked by a series of activities and celebrations.

During 2016 GOB Menorca has maintained its high level in all its projects, despite having to keep to a very tight budget. The number of members currently is 1,317. This is the principle source of finance which allows GOB to keep working independently with the object of making human activities and the economy compatible with the preservation of the environment and its natural resources. The contribution of the volunteers is inestimable giving so much of their time to make projects such as the Wildlife Recuperation Centre and Es Viver, the Garden Centre, viable.

A few highlights: during 2016, we have dealt with questions which affect the region and its landscape, such as the modifications to the NTT (Land Regulations) and the PTI (Planning permissions); the alterations to the main road; the integration of renewable energies; as well as the very serious problems concerning the island’s water. With reference to environmental education, GOB has edited three books this year, and maintained its programme of activities both in schools and with other groups and ages. The Wildlife Recuperation Centre has received the Onda Cero Prize of Minorca and has cared for around 1,100 animals with a high level of success for their recovery and for their release back into the wild (37%). GOB has made official complaints on repeated cases of birds electrocuted on electric poles.

Es Viver, the nursery garden for Minorcan plants, has continued to give its services in design and maintenance of private gardens as well as promoting environmental practices including the purification systems of residual waters using particular plants in green filters. The Land Stewardship Scheme now has 27 agreements with farms representing 5% of all the agricultural land of Minorca.

The meeting agreed a budget for 2017 of 335,000 euros, equal to the 2016 budget. This year´s budget will allow continuing with all GOB’s current projects, though it will be necessary to considerably improve the finances of some of these, such as for the Recuperation Centre for Wild Animals. For this project more members are needed as well as volunteers to help with campaigns such as “be a sponsor for the animal hospital”.

The General Meeting of members also approved the renewal of the members of the Board of Directors for GOB Minorca, who are: Jaume Obrador Tuduri (President), Alba Garcia, Begoña Piqué, Biel Carreras, Bosco Febrer, Carlos Coll, Eduard Furró, Jara Febrer, Jeroni Marquès, Joan Florit, Louise Watson, Magda Seoane, Maite Martínez, Mar Lluch, Maria Cardona, Maria Giraldo, Pacífic Camps, Pepa Orfila, Santi Udaeta i Xavi Camps. These people with their different qualifications and ages will continue to volunteer their time for GOB during 2017, the year in which we will celebrate 40 years of the association’s existence in Minorca.