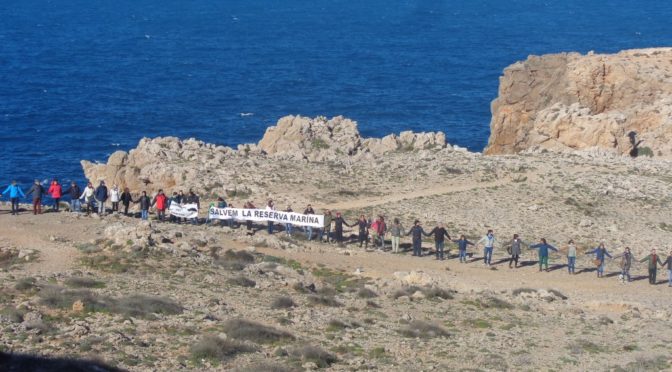 Last Saturday many people took part in a demonstration to raise awareness of the effects of illegal fishing in the Marine Reserve along the north coast of Menorca.

Menorquins pel Territori (Menorcans for their Territory) and GOB organized this event. About 200 people took part and amongst them were representatives of the Confraternity of Menorcan Fishermen, different public officials and representatives of various civic organizations. The north wind blew throughout the excursion and during the symbolic embrace in support of the Reserve.

The marine importance the area was explained and a manifesto with its demands was read. It reminded that originally this area had become protected by popular demand. That was based on a joint request between the confraternities of fishermen and different groups which had come to a consensus concerning the need to protect a significant area of the coast in order to regenerate its important marine biodiversity.

The geological variety of the area is reflected in the diversity of its marine environments and, furthermore, areas of high activity are alongside places like Sa Nitja or Fornells which provide important shelters from the wind. The majority of ecosystems are well conserved, some of which are exceptional and special to the western Mediterranean. All have a positive potential, but there must be some control on the pressure of excessive fishing, characteristic of a large part around the island.

The restrictions of use and extraction which have been applied since the declaration of the Reserve in 1999, have made it into one of the richest coasts of marine life. This is one of the main functions expected of a reserve: a space allowing repopulation, and therefore, for other zones nearby, thus maintaining the sustainability of fishing activities.

Apart from the benefits to fishermen, there has been a positive trend in nature tourism giving recognition to the names of Fornells and Menorca as areas maintaining outstanding marine importance.

But in the last few years, interest in the marine reserve has not been at the top of the public agenda. The cuts in public services particularly affected the financial allocations for the environment by the past government. As a result, vigilance of the sea has been diminishing resulting in much more illegal fishing.

Information which it has been possible to acquire points to many of the official complaints raised at the time that did not end in sanctions. Sometimes administrative processes become stuck either for political reasons or they are just abandoned. In addition there is now a lack of surveillance at night time and the weekends. The sense of impunity has grown and the poachers are exploiting the reserve.

In practice, when an area remains unprotected, the word gets around very quickly amongst the determined. Then there are boats coming from Mallorca to collect the booty. There are both professional and recreational fishermen. Included was some professional drag net fishing boat that wanted to drop its nets which dragged inside the restricted zone.

In order not to lose the richness of the sea gained during the last eighteen years, it was agreed to organise this event and start a series of initiatives to reverse the current situation and put solutions into action with great urgency.

The appeal is made as much to the Consell Insular (The Island Government Council) charged with surveillance and the Balearic Government in charge of the Marine Reserve, as to the Central Government, all of whom could help to provide for more security agencies.

The local population can also help with this need for control of the area by keeping watch along the protected coast.

In the coming days, a formal request will be made to be able to consult the records of sanctions given during the last few years and check how many were processed, and finalised as expected. Illegal fishing ought not to be left to continue with impunity.

A series of meetings will be set up with different public administrative officials who could do something to improve the situation.

It is requested that the Commission for Monitoring the Marine Reserve be reconvened. It is composed of different social agencies and has not met for some years. The spirit of caring for protected marine areas must be revived because this is the only way we can guarantee the future of both the marine environment and the human activities that depend on it.

We are confident that the start of 2017 is the time to return with renewed energy to doing things as much for the land as for the sea of Menorca so that the island continues to be the paradise it has been for so many years.

One thought on “The Marine Reserve merits greater effective protection”