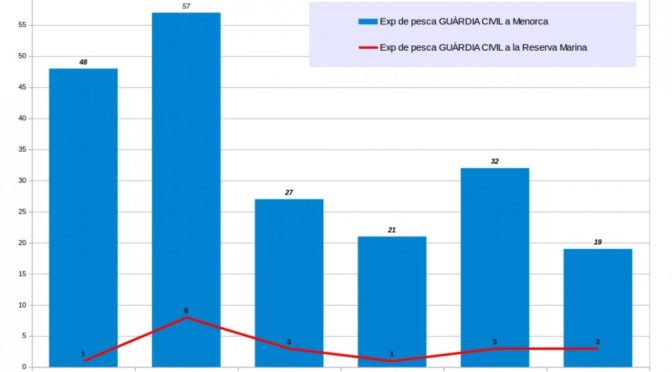 When the demonstration last January took place to demand greater protection of the Marine Reserve to the north of Menorca, it was then announced that GOB would be able to consult the records of fines levied in the last few years. It has been done. The records have been analysed showing what fines have been made during the last six years by different groups monitoring fishing.

In general, it is notable that the fines given tended to be at the minimum level expected, at between 300 and 150 euros, so the result was perhaps only an annoying cost to those whose licences had just expired. However, it seems clear that the fines are insufficient for stopping illegal fishing, since this expense is absorbed by the economic gains of selling the fish and shell fish.

Logically, it would appear reasonable to be able to put higher fines on repeat offences. However, based on the statistics, it seems the amount of monitoring has diminished a great deal in the last few years and, therefore, it is not easy to pursue persistent offenders.

Of the three monitoring groups investigated (Guardia Civil, Fishing Inspectors and Marine Reserve Monitors) the most active was the Guardia Civil. Although it is not dedicated just to the sea, it has issued 204 fines concerning fishing matters of which 19 were within the Marine Reserve (image on top).

The Fishing Inspectors, whose work is dedicated to this sector, have processed in the same period 44 fines, of which only 2 were within the Reserve.

Lastly, the three Monitors that work exclusively on the Marine Reserve, have issued 19 proposals for fines.

If the attached graphs are compared, it can be seen, for example that the Fishing Inspectors found the greatest activity in 2012 (this year they issued 21 fines, nearly half of all those during the six years) but then their results decreased (none in 2015 and only 3 in 2016).

It could be thought that the citizens behave absolutely correctly in the Marine Reserve and so there would be no need for fines, but this is not the impression of the monitoring groups in the area since it appears that the lack of marine life confirms the lack of good management.

The Marine Reserve of North Menorca is not a strictly protected area. It is considered to be a regulated area of more than 5,000 hectares, and where fishing is allowed but with certain conditions. However, if these conditions are not respected, so it is not allowed to regenerate fully, then the Reserve will cease its function of recuperating the species and the quantity to be able to repopulate the surrounding sea.

Together with Menorquins pel Territori (Menorcans for their Island) GOB is preparing a document of proposals to improve the monitoring of this area of the Island a subject which requires major attention.