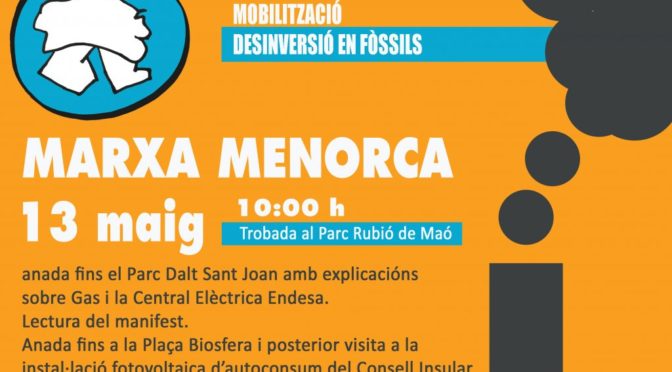 The lobby group, Menorca without Fossil Fuels, has organised a protest march to stop further investments in energy requiring fossil fuels and to ask that the Central Power Station in Mahon changes its importation of combustible gas to natural gas brought here by boats. This initiative coincides with an international week of actions demanding a stop to investing in fossil fuels and in Menorca it will be preceded by a series of talks and conferences all over the island.

Combustible fossil fuels are responsible for incipient climate change at a global level, and make for a very bleak future for our economy and to the environment. It is known exactly how to combat the problem. A very important part of the solution is to change the current energy model without delay. Not only is it based on combustible fossil fuels but its management is in the hands of near monopolies. It should be replaced by a new non contaminating model, based on decentralized renewable energy. It is already possible to have 100% renewable energy applying current technology in Menorca. We only have to have the will to achieve it.

One of the demands of this action, besides that for installing renewable energy, is a petition that the central power station in the Port of Mahon stops the use of fuel oil and gasoil and immediately makes use of natural gas brought in by boats. It is perfectly possible for the central power station to do this and it would thus reduce the emissions of CO2 by 22% as well as stop the emissions of other dangerous contaminants such as nitrogen oxide and sulphur. This is a transitional move before achieving 100% renewable energy.

The march will take place on Saturday 13 May meeting at the Parc Rubió in Mahon at 10.00 am. From there it will go to the park of Dalt Sant Joan where the manifesto will be read, with views of the central power station at the Port and an explanation will be given of what happens when natural gas is used. Then the march will continue to the Consell Insular where there will be a guided visit to an already installed solar photovoltaic plant. The festive route can be done on foot or by bicycle, the itinerary in Mahon will be sign posted.

The following events before the march are:

Ferreries Thursday 4 at 19.30 in the Plaza España, with a talk “Entre tots encara podem refredar el planeta. SOM energia” (Between us all we can cool the planet) by Francesc Flo and Anton Soler, from Som Energia cooperative.

Ciutadella, Friday 5 at 20.00 hours, at the Cercle Artístic, a conference with Benjamin Carreras “La salut del planta” (The health of the planet)

Mahon Monday 8 at 20.00 hours at the Consell Insular, a conference with Benjamin Carreras “La salut del planta” (The health of the planet)

Es Mercadal Thursday 11 at 20.00 hours at the Centro de Convenciones, a talk “Transició energètica i socialització de l’energia” (Energy change and its sociability) by Rafa Muñoz.

Es Castell Friday 12 at 20.00 hours in the local Associació de Veïns, a talk “El gas a Menorca” (Gas in Menorca) by Miquel Camps.

We invite you to take part and so help in bringing an end to climate change.