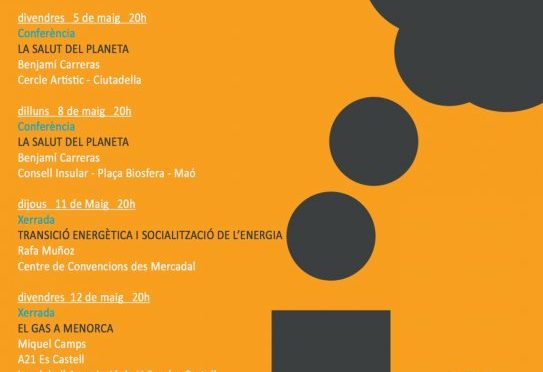 Friday 5 May was the beginning of a week working towards making Menorca Free of Fossil Fuels, a week in which it is being asked that Menorca changes to 100% renewables, with realistic proposals on how this transition can be made. The manifesto for this action is as follows:

The Energy Transition for Menorca

Menorca is a small island which relies on energy almost entirely (99%) from combustible fossil fuels, at a cost of around 250 million euros per year, with a production cost of electricity which is double that of the Iberian Peninsula.

The central power station, in the hands of Endesa, is situated in the Port of Mahon and generates 83% of the electricity for the island from low quality fuel and gasoil. This is responsible for 60% of all the emissions of CO2 from the island’s energy consumption. Another 21% of emissions are produced from land transport and 9% from airplanes. The consumption of combustibles by domestic sectors, by services, by industrial and agricultural sectors are responsible for 9% of CO2 emissions.

In the last few years, there has been growing awareness for the need to change this form of energy as much for environmental as for economic reasons, and for the consequent necessity to support renewable energy. Now there is a photovoltaic project being processed which could increase the production of electricity by this renewable method by 3% to 20% and with a saving of 10% emissions of CO2. In addition there is a series of projects for private and institutional buildings to be able to produce their own electricity.

It is evident that, for the moment, we are unable to give up the central power station, as all new projects take a while and in any case the production of renewable energy would require an infrastructure for storage. But it would be relatively easy to reduce emissions changing to natural gas the central power station’s five turbines currently burning gasoil. With this change and using them to their maximum capacity, the greatest efficiency would result from dispensing with the highly contaminating diesel motors. Day by day, to make a unit of energy three need to be burnt. But with this method, the emission of CO2 will be reduced by 15% though it would leave the emissions of SOx and particles of PM10.

At the moment there is another private energy project underway to install gas for domestic use for the whole island, for which it is necessary to dig 600 kms of ditches and build 3 storage plants and in the future a gas pipeline below the sea between Mallorca and Menorca. This work is immense and expensive and presupposes the complete replacement of the current gasoil supply, as well as propane and butane in buildings. The reduction of emissions would be only 1.5%, and that would not include all the emissions derived from the construction of the infrastructure. The proposed project has come late and is inappropriate and does not help in the development of renewables. By contrast, gas could be brought easily to the central power station by boat and allow for the reduction of significant emissions as has been explained. In the medium term future however, it is hoped that hydrogen technology will have developed sufficiently to replace gas and so there would be production of completely clean electricity.

In agreement with what has been stated, and with the global movement which will take place during the week of 5 – 13 May, Menorca requires a change of policy on energy for our island which values the use of natural gas from the central power station above that of gas for domestic use as proposed above. It must not be forgotten to keep fighting for 100% renewables, working at an island level with an energy plan (in process) and at a national level for the abolition of the tax on solar power.

The Stand to campaign for Menorca without fossil fuels

See also the international campaign for divesting in fossil fuels.