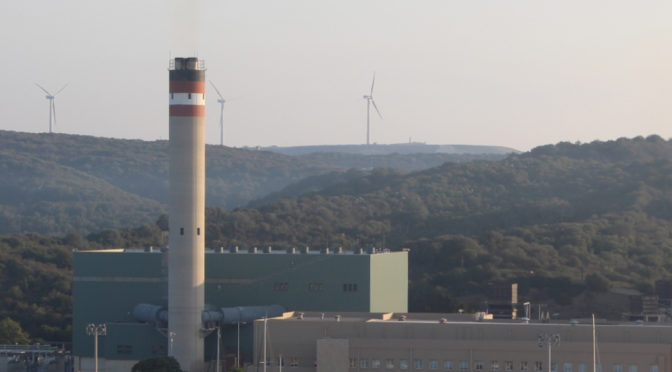 Control of the Central Power Station, the approach to renewable energy, control of transport emissions and other similar subjects are the questions on which GOB wishes to deal with the new Counsellor for Energy Transition and with the Vice President of the Balearic Government.

GOB has asked for a meeting with the autonomous government´s manager of energy, after statements he made a few days ago suggesting that the Central Power Station did not pose any threat to the health of the nearby population.

The current central power station produces electricity from burning gas oil and diesel oil. This causes significant CO2 emissions, nitrogen oxides and sulphur oxides, and particulates. The cooling of the diesel motors is made within an open circuit that constantly discharges hot chlorinated water into the Port. The power station has increased its activity by approximately 15% since the submarine cable connected to Mallorca is no longer used.

The history of this power station does not give much optimism for environmental issues. The turbines installed some years ago to increase the generating power, were engines that even then violated existing European laws. In response to court declarations made by GOB, they were treated as “emergency engines” with the promise that they would not work for more than 500 hours per year. Now they work constantly.

In order to avoid permanent contamination of the water in the Port, GOB repeatedly asked the company to make a closed circuit that would allow the cooling of the engines as before but without the necessity for the daily discharge of chlorinated water into the Port. However, the company declined to make the investment alleging that there was no legal obligation to do so.

A little while later, GOB discovered that in 2016 the turbines had been working for six months without measuring the contamination from the engines. One part of the fuel used went beyond all the assigned parameters and the company claimed that the devices were broken. Relevant legal declarations have been made for two new disciplinary proceedings.

Now Endesa is injecting purified water into the combustion process, with the aim of reducing the emissions of oxygen and nitrogen oxides. They do this under regulations which were in force for 2010. The deadlines have now passed. Menorca still emits the maximum amount of nitrogen oxide that the current regulation permits.

In the opinion of GOB, the central power station is an example of a procedure that requires urgent change. For this reason, the realistic possibility of substituting gas oil and diesel by renewables must be discussed.

The society would like new projects of energy supply to be undertaken with the financial involvement of Menorcan capital, that respects low impact criteria for constructions which, when built on rural land, have conditions for dismantling the installations at the end of their useful life.

They also wish to state to the Vice President the concerns that arise from contamination by large cruise ships and, moreover, worries about the intentions of wanting to divert the mega cruisers to Menorca that have generated repeated social protests in Palma.

GOB would like to know the prospects for the application of the Law of Energy Transition managed by the Government and to make it possible to accelerate the transition that so many people in the world consider is such an emergency.