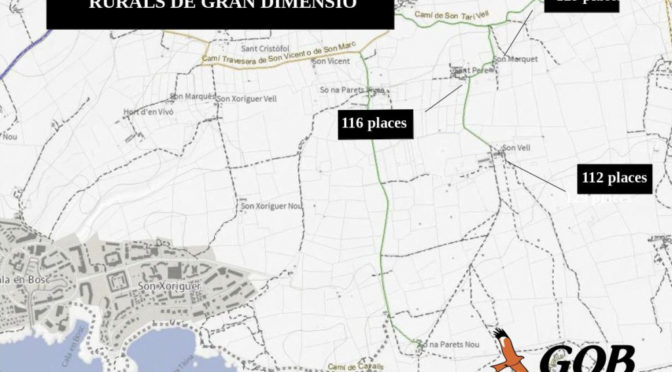 Menorca is living in a boom period for countryside tourist accommodation, with many initiatives for agrotourism and rural hotels. Not all the projects are similar, as some have all the appearances of being short-term speculation for estate agents and others help in moving tourism from the coast inland.

GOB has made official complaints against the declaration of general interest by a rural hotel envisaged for the farm of Son Marquet near Ciutadella, with 129 tourist places. The project intends to use all the existing buildings to convert into a tourist establishment, that is, the houses, a large barn, the warehouse, the stables and the cattle feed storage area. There will not be any buildings left for agricultural use.

Generally, the activity of creating rural tourist accommodation is considered under a different type of building permission. This permission is aimed at people who are not interested in making large hotel establishments, but who are helping to adjust the tourist season with smaller establishments, and is directed at a high level of market acquisition that is sensitive to the environment. It should serve to allow for viable farming management and for renovating the architectural inheritance of the property.

Moreover, GOB expresses its doubts concerning projects with dimensions such as at Son Marquet, promoted by Sagitario Playa SL. In order to assess whether their objectives are greater than mere individual interest, the impact that their forecast activity will have on the general interests of the island will have to be measured from both economic and environmental points of view.

In the allegations presented, considerations such as those below have been raised: