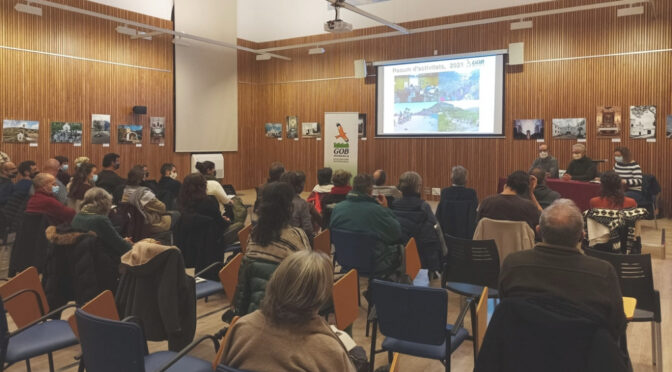 With a rate of growth of more than one new member a week, GOB Menorca has reached a membership of 1449 this year. This social body guarantees us total independence when we are placed in front of the island’s environmental problems and present proposals for solving them. This is one of the conclusions of the Annual General Meeting that took place on 21 December and where Carlos Coll was unanimously elected as the Island President for another two years.

During 2021 GOB continued working at a good pace offering environmental alternatives for the sustainability of Menorca. Four more agreements have been added to The Land Stewardship Scheme bringing the total to 34 farms. The Recuperation Centre for Wild Animals has helped 2,555 animals. The Es Viver garden centre for Menorcan plants has sold more than 14,000 plants for sustainable gardens and kitchen gardens. I,720 people have taken part in the programme for adopting sections of the coast with 103 adopted. 2,490 students from 35 education centres on the island have taken part in some of our education workshops. These are some of the numbers that reflect the work done during 2021 and can be seen in detail in the attachment to this article.

The Meeting approved the budget for 2022 of 760,000 euros. Membership fees and donations represent 10% of the income that allows us to finance the work dedicated to environmental politics with total independence. The remaining projects (environmental education, the Wildlife Recuperation Centre, etc.) require other financial sources 62% coming from the private sector (services, sales and sponsorships) and some 28% from various public bodies (town halls, the Island Government (Consell Insular), the Balearic Governing Council (CAIB), the European Union…)

The  year 2022 faces great challenges. To the general situation of uncertainty is added an opportunity to define a regulatory framework that responds to problems such as overcrowding and the protection of water resources. The approval of the Island Land Planning and the Reserve of the Biosphere Act will be key elements and GOB will continue acting to incorporate efficient measures for island sustainability. We will continue acting for the future of the farming sector as a tool for improving the environment, the climate crisis, the protection of the marine environment, the reduction of waste, responsible consumption, the preservation of the landscape, sustainable transport… In all these fields, and more, GOB hopes to contribute by working positively towards the environmental sustainability of Menorca.