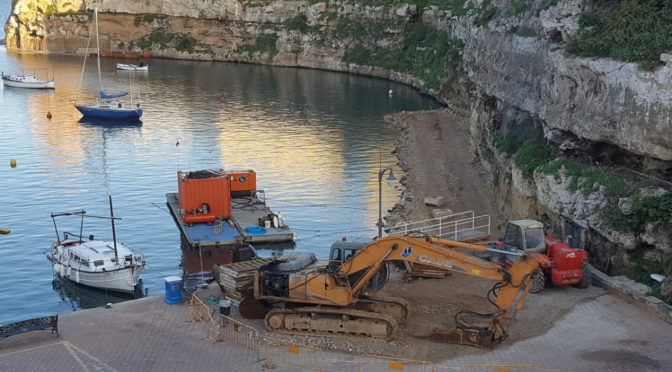 GOB would like to express its concerns for the change in the construction works of a pedestrian link that the Port Authority has instigated between Moll d’en Pons and Cala Corb. There, where they announced there would be an overhanging wooden walkway, is, in reality a working dock that is destroying the ecosystem at the base of the rocks. GOB has asked to see the project approvals.

When the Port Authority announced this new connection along the side of the Port, there was to be an overhanging wooden walkway on the section along Cala Corb similar to the one built some years ago on the south side of Calesfonts.

However, the project seems to have changed, the option now being to pour building materials along the whole of the sidewalk and make a working dock. This change affects the entire submarine rock area and the flora and fauna that live in it.

The port of Mahon has the largest protected area of sea in the island of Menorca. This means that, in addition to the visible port and nautical activities, it is also a very important area for young fish and the introduction of different fauna. Conservation of areas in the port that have not yet been altered ought to be recognised by now as enhancing it.

The organisation that manages the Port does not seem to realise that. GOB has asked to be able to see the details of the approved project and so check if the change contains some form of shelter, because the environmental effects sustained are much greater with the dock construction than with the wooden walkway.