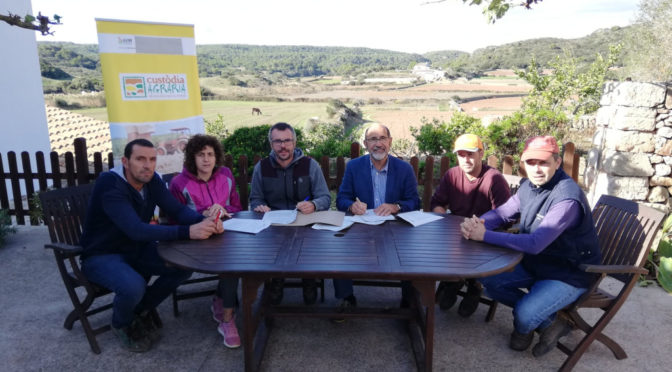 The farms of Algaiarens, Sa Font Santa, Alfurinet and Son Felip have joined the Land Stewardship Scheme that GOB promotes. It deals with some thousand hectares with high levels of natural values, where techniques are applied to give a good economic return with the best environmental conservation.

The Land Stewardship Scheme is a method often used in northern Europe and throughout America, aiming to involve the owners, managers and consumers of a countryside that conserves its natural values, culture and landscapes. For some years, Menorca has been working on adapting its farming practices given that it is the industry managing the greater part of the island.

The crisis affecting farm production is essentially because of worldwide markets with which it is very difficult to compete on prices especially in places that are far from large consumption centres, such as mountain farms, islands and other remote areas.

In this context, like in other economic sectors, ways of adding value to production have to be sought. Products derived from farms that are part of the Land Stewardship Scheme look at three basic criteria of health, nature and proximity. That is, healthy products (that are not toxic for humans nor the land) that respect the natural values of the land (such as the landscape of Menorca) and that are produced for local markets.

The farms of Agaiarens, Sa Font Santa, Alfurinet and Son Felip have ecological certification and experiment with low cost systems such as direct sowing, collecting their own rainwater and breeding autochthonous animals. They are already supplying olive oil, honey, meat, flour and garden products.

Three farming families and a technical team advise on the management of these places, which, moreover, have a very high natural value. They are categorised as a Natural Area of Special Interest, A Place of Common Interest, and an Area of Special Protection for Birds.

The Land Stewardship agreement does not implicate any economic transaction. It is a way of working with a vision of joining environmental conservation with economic viability from the country land. This is an imperative against the general decline of the natural environment and climate change. Today, Menorca is leading the way for dealing with these challenges.