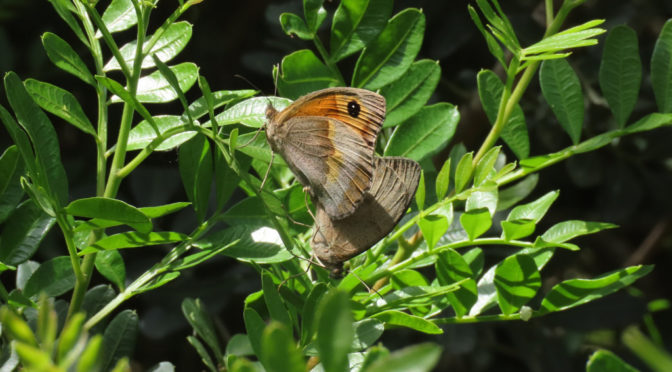 There are plants and animals that react rapidly to changes in land management. The agreements that GOB has made with the farms that have signed up to the Land Stewardship Scheme include tracing, twice a year, wildlife indicators for evaluating the good health of the land environment. This is the time for starting analysis of the springtime work done in the fields.

A large part of the biodiversity we see in the Menorcan countryside depends on adaptations of farm management. Responsible stewardship enhances the presence of insects and grain that are food for small mammals and birds and the basis of a rich trophic network for wildlife.

The relationship between the type of agricultural practice and biodiversity is evident but scientific studies that follow the effects of farm management on the flora and fauna are lacking. The Land Stewardship Scheme has carried out its own study of this interrelationship in order to find a basis on which to build sustainable agrarian practices.

During the spring, the fourth monitoring of biodiversity indicators at the farms that are part of the Land Stewardship Scheme took place. The work is done in conjunction with other Mediterranean places to give foundation and visibility to the relationship between some cultural practices, such as those that shape the countryside of Menorca, and the implied environmental health of the rural environment.

The study draws attention to various biological groups. To begin with, butterflies, insects that are very sensitive to climatic change have variations in the composition of their habitats. With training, different types can be recognised and an inventory of them can be made. A study of the vegetation between crops harvested or found in pastures will show how much deterioration grazing has caused or is causing to the land.

A very interesting bio indicator that is often overlooked is the group of coprofages, formed by insects that feed mainly on excrement. Studying them in the excrement of cattle shows the health and wellbeing of the animals.

The indicators that we are looking for can be evaluated easily with the help of volunteers suitably trained. After nearly two years, we now have a group of people who feels to be part of the project and who enjoys doing this work. Moreover, we have the support of a group of experts who have guided us and advised us from the first moment.

The Land Stewardship Scheme of Menorca supports those farms that have opted for sustainable management. Having signed up with GOB they agree to a series of measures that promote a higher environmental richness in the land.

It is precisely this rich biodiversity linked to environmental conservation that gives the products from the farms under the Land Stewardship Scheme greater value and the reason for people preferring to buy and consume them.