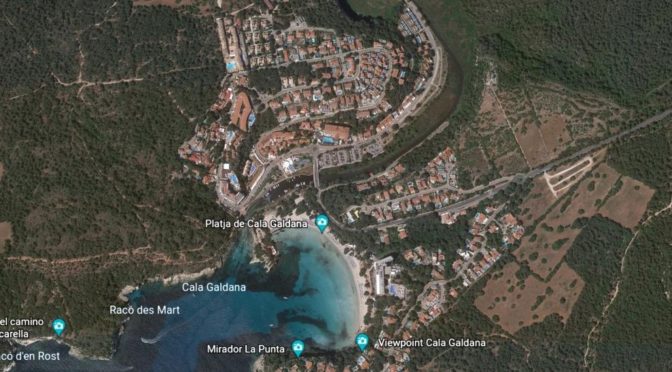 Another year and for many decades, the last stretch of the stream at Cala Galdana shows serious symptoms of contamination. GOB wants to make itself heard so that once and for all politics do not divert attention from dealing with the problem at its origin.

In the past few days there have been articles in the press on the contamination of the stream in Cala Galdana. It is mentioned now because the tourist season is about to start but, in reality, discharges that have caused the contamination have been happening for months.

At the end of last November, the stream changed colour abruptly becoming white from the top of the urbanization downwards. This happened again at the beginning of March 2021.

They were not small leaks but large discharges at a time when there was hardly any activity in the urbanization. Either it was from the water treatment plant or someone has a system that accumulates wastewater with a direct canal to the stream.

It is not a natural phenomenon, nor does it come from the sea. The changes are drastic at a particular point in the stream that is more than 1 kilometre from the beach.

As much for the change in colour as for the strong odour that the stream gives off each time, it is impossible, that no one responsible at the urbanization has noticed it. It must be remembered that the urbanization comes under the terms of the municipalities of Ciutadella and Ferreries and that the water treatment plant is managed by the Balearic Government. So, three administrations and a large number of residents are constantly in the area.

Now that tourists are coming to the bay, there is a return to the ceremony of confusion, for not addressing the real problem. It costs money to dredge the stream similarly as it always does with the posidonia.

But Cala Galdana has been suffering from contamination connected with the urbanization on the last stretch of the gorge for many decades. This year, with the pandemic restrictions, it is even more scandalous that it is happening again. Someone habitually makes discharges into the stream without consideration and this person must be found, and adequately penalized.

We must stop blaming the stream and posidonia that are only the victims of these circumstances.