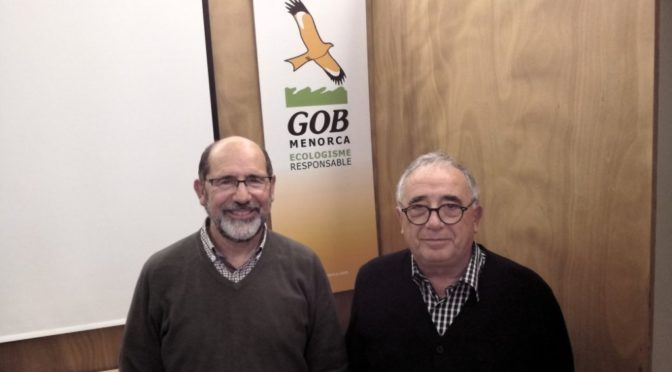 Carlos Coll succeeds Jaume Obrador as the President of GOB Menorca. Carlos Coll has been a member of the Board of Directors for many years and for some time has been coordinator of the association’s volunteers.

On 21 December, GOB held its Annual General Winter Meeting to approve the budget for next year, to review a summary of the activities carried out this year and to elect new officers. This year (2017) is also the year in which the Island Presidency is renewed and which has been filled by Jaume Obrador for the last four years.

The hundreds of activities which took place during 2017 were also noted. Associate membership has grown to 1,320. The budget for 2018 was approved for about 330,000 euros.

At this final meeting of the year, approximately half of the Board of Directors was re-elected leaving it comprised of 22 people.

In his farewell speech, Juame Obrador recalled the more difficult events of his presidency: the main road campaign, the dredging of the Port, the attempts at overturning land protection rights and many other actions. He observed that he always recognised the enormous work done by the numerous volunteers, the dedication of the contracted personnel, and especially the large public response to each call for support.

The Island coordinator, Cristòfol Mascaró, drew attention to Jaume Obrador’s indefatigable commitment and his humanity, his ability to mediate and his honesty, which has resulted in the high esteem in which he is held by all the people with whom he has had dealings. Obrador will stay on as a member of the Board of Directors and received a large ovation from all at the event.

For his part, the new President, Carlos Coll, expressed his gratitude for the confidence that has been put in him and said that he considered GOB was on the right road in drawing the attention of the public to environmental problems, in searching for alternatives and communicating well-based information. There are many challenges to confront and follow the path of aiming to increase better relations between the public and the environment.