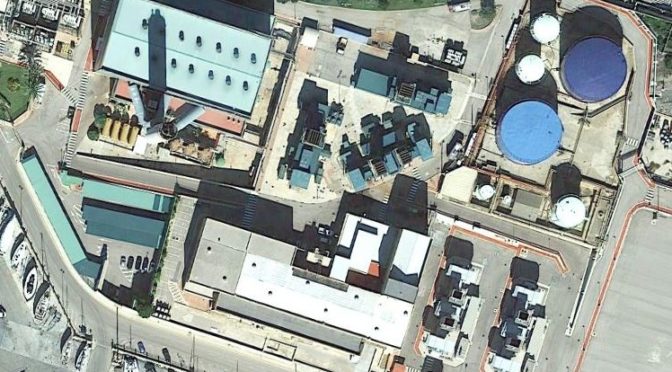 GOB has sent a written request to the Balearic Government asking that a series of records made by the Central Electricity Power Station in Mahon is checked. The association has had access to documentation which has worrying information.

In 2014 GOB presented an appeal against the decision of the Ministry of the Environment of the Balearic Government to allow the increase of spillage of chlorinated water that the Central Electricity Power Station makes into the Port of Mahon. At the root of this matter, it was discovered that the power station has, over many years, dumped 70% more in volume than was authorised. It opened a dossier of sanctions which was quickly closed because the infractions had already been committed.

GOB was permitted to consult some of the documentation showing the data on the functioning of the installations sent annually by the Central Power Station to the Government.

Nitric oxide (NO) and nitrogen dioxide (NO2) are among the different forms of nitrogen oxides (NOx). The information given by the Ministry of the Environment deals with gases that are toxic and irritants. When combined with the humidity in the atmosphere they can turn into nitric acid, which can be very corrosive, known also as acid rain. Exposure over time to NOx can affect lungs irreversibly.

The so called gas turbines, but which function on gas oil in the Central Power Station of Mahon, mostly go over the emission limits that were already established when they were installed. At that time, they accorded with the Directive 2001/80/CE on the limits of emissions into the atmosphere from large gas installations. This was recorded by GOB in their allegations in 2003 when the TG3 turbine was being processed. They also made depositions in the same way for the TG4 and TG5 turbines.

An earlier Directive, of 2010, established some lower limits of NOx for installations made before 2013. In accordance with this new regulation, the gas turbines, including those with combined cycles, using light distillations and methods such as liquid gas, ought to comply with a limited value of NOx emissions of 90 mg/Nm3. These values do not apply to the emergency turbines that function for less than 500 hours annually.

In the data given by Endesa with respect to the functioning of the central power station in 2015 and 2016, some points require clarification.

GOB records that in the environmental authorisation granted to the Central Power Station and published in the BOIB of 22/05/2008, the five turbines were left on condition that their use was as emergency turbines, i.e., with a maximum of 500 hours annually.

For these reasons, the Balearic Government has been asked

Increase of emissions and lack of checks in 2016

During the year of 2016, there was a shipment of fuel oil which showed grave incompatibility with the one used before in the Central Power Station. It caused a failure in the filters, resulting in a malfunction of the purification systems of fuel oil and in records of high levels of different gases, with a 50% increase in SO2 compared with normal functioning.

This situation occurred during the period between March and September. Thus these problems affected 60% of the year in question.

The energy company alleges that the repercussions from the defects of the fuel also altered the functioning of the measuring equipment owing to interference in certain compounds which distort the measurements making them appear too high. From this the company deduced “a strong increase in the lack of availability of measuring equipment”.

It ought to be recorded that the motors consuming fuel oil, were functioning for a total of 24,085 hours during 2016, according to the figures provided by the company, equivalent to 79% of the working hours of the different installations existing in the Central Power Station. This is not exactly a small matter.

For this purpose, GOB has asked:

GOB believes that if the control of the Central Power Station is to be done by the same company that owns it, the general public has little confidence, because it has economic incentives that are contrary to the general interest.

Based on transparency and the facility of access to environmental information which different legal texts incorporate, it has been asked that an emission reader, which follows the level of emissions of the different worrying substances coming from the Central Power Station, be installed in the town, in a place accessible by the public . It should measure at least CO2, NOx, SO2 and particles.

Revision of an Integrated Environmental Evaluation

The environmental authorisation of this type is valid for eight years. The corresponding one for the Central Power Station of Mahon was published in the BOIB on 22/05/2008.

For this reason, GOB has asked to know if the company that governs the Central Power Station of Mahon has presented in due time and in the correct form some process for the renewal and, in their case, if they have started to apply the best technologies currently available, as regulations require.

Recently the ministry responsible for energy announced its intention to change the functioning of the turbines at the Central Power Station of Mahon to using gas brought in by boat.

Despite the fact that the gas is a combustible fossil fuel which gives off emissions and has to be imported from abroad, this change signifies a great advance in reducing most of the emissions into the atmosphere.

Currently, fuel oil and gas oil is being used for the functioning of the Central Power Station. The Integrated Environmental Evaluation made in 2008 said in point 8, “requirements of security and of activities which currently use fuel in those groups that are compatible for the use of gas, should switch to gas”. This option to apply gas at the Central Power Station does not have anything to do with another project which is being processed in Menorca aiming to install a network of tubes for all the island to bring gas to domestic kitchens.

Given that, at the moment, it seems that the Central Power Station is going beyond the emission levels which they should observe in accordance with the regulations currently in force, GOB has asked that the environmental agency should provide an incentive for a change intended to diminish the impact caused by the Central Power Station on the environment and the people.

GOB is confident that the Environmental Ministry will react to this data and hopes that it will not be slow in responding, at the end of which any possible infractions will cease.