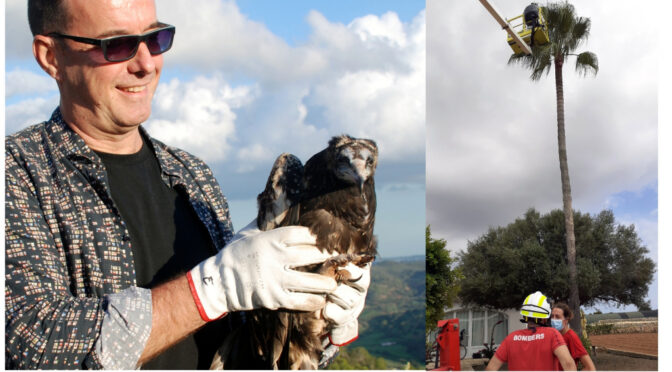 Cris Juanico, the Menorcan singer, recently participated in the liberation of an Egyptian vulture that had been injured and cared for at the Recuperation Centre. Firefighters had to rescue this young and inexperienced vulture that was trapped at the top of a palm tree in Sa Bassa, near Sant Lluis. The help of everyone is very important for the success of the work of the Wildlife Recuperation Centre beginning with the people who tell us when they find an animal and by many other people who help us in many ways including the volunteers and the sponsors of individual resident animals. sponsor one of the resident animals.

This vulture was admitted with cuts from the palm tree leaves, but after a month of care in our facilities, it was completely recovered. These vultures (Neophron percnopterus) are one of the most symbolic birds of Menorca, where there is an important resident population all year round, whereas on the Peninsular they are present only in the winter. They are from the vulture family. They breed mainly in the crags of some ravines and their feeding is closely linked to the Menorcan mosaic landscape and extensive cattle farming.

As well as the help from volunteers and others who sponsor individual animals, the Wildlife Recuperation Centre functions thanks to an agreement between GOB and COFIB(Consortium for the Recovery of Wildlife of the Balearic Islands). Also, it is greatly helped by the involvement of Lithica that gives us the space and that of the Consell Insular, through the Agency of the Menorca Biosphere Reserve, and the Town Councils of Ciutadella, Maó, Es Mercadal, Ferreries, Sant Lluis and Es Castell and other supporting businesses and associations.