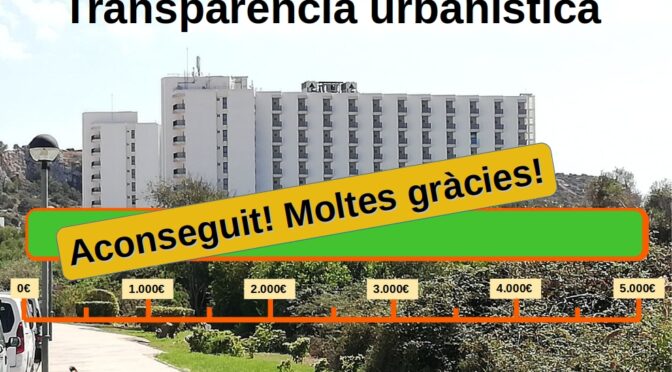 GOB has started criminal proceedings against the Town Council of Alaior for their repeated refusals to allow the consultation of files regarding the Son Bou Hotels and the illegal pools of Torre Vella. Can you help us with a donation here

As a result of trying to consolidate the two towers of the Son Bou hotels keeping the same height as now, that could last another fifty years, GOB investigated the file and discovered some town planning conditions that have never been met. The written communication on these irregularities has stopped the intention to consolidate the buildings up to now, and which GOB is monitoring. Nevertheless, some months ago, the Town Council denied access to the file claiming that the processing was unfinished.

The exact same procedure has been suffered in the case of the seven illegal swimming pools and other activities not covered by licence at the agro tourism hotel of Torre Vella which has led to the opening of disciplinary proceedings by the Consortium of Town Planning Discipline as well as the body of Environmental Agents. A request was made to see the municipal file in which a proposal for legalization had been made by the promoters. Access was again denied with the same argument of unfinished processing.

In both cases, the Son Bou hotels and the agro tourism hotel of Torre Vella, the written request to consult the files was sent twice to the Town Council and each time denied. GOB then filed a plea with ample arguments for each case and, once again, the Town Council has denied access. Since the Town Council persists in its stance despite all the arguments deployed, criminal proceedings are being initiated against the political and technical people found to be involved.

It is understood that arbitrary decisions have been made that, allegedly, could lead to the crime of prevarication and the infringement of civic rights. Not wanting to show the files until their finalization impedes the exercise of rights on the part of those with an interest and that different laws authorise to entities such as GOB.

In the opinion of this association, it is necessary to act forcefully against this intention to obscure the town planning procedures. So that financial considerations are not an obstacle, it is necessary to find 5,000 euros that will be destined for the judicial proceedings for these two cases.