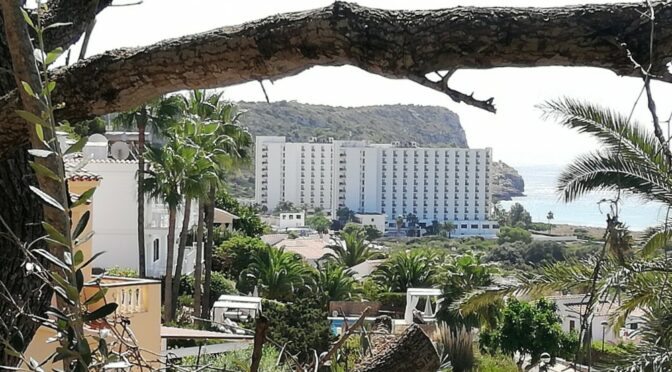 The Alaior Town Council has granted a licence for the Son Bou Hotels, exactly during the period when they prevented GOB from consulting the file to know what documentation had been presented by the promoters. The criminal proceedings announced are already formalized in court. Within 48 hours all the finance required has been covered. Very many thanks to all the people who have contributed.

When in 2017 the intention of the Melia Hotels was known to consolidate the two towers of Son Bou that would last another few decades, instead of adapting to current planning legislation, GOB consulted the files of the hotels and found that they had never complied with the necessary requirements for the plot of land.

Constructed at the beginning of the seventies, the two enormous edifices that affect the landscape of Son Bou and that represent one of the main impacts on the coast of the Island, benefitted at that time by bizarre reports from people acting both as representatives of the Town Council as well as for the promoters.

The deficiencies detected by GOB have had the new project halted, because it is not possible to modernise a building that does not comply with building conditions. One of those is that it does not comply with the dimensions of the plot necessary for accommodating the volume of the building. When it was known that the promoter had presented new documentation with respect to this, GOB asked to see the presented file.

It was then that the Town Council repeatedly denied GOB access to any documents. This mal practice to explain the prevention of consulting an already controversial file now becomes multiplied because it has been known that, during the months that consultation was being prevented, the Town Council granted a licence to regroup the plots.

The fact that the prevention of a right, requested several times in writing,  translating into a decision on which GOB, the interested party, was unable to give an opinion, increases the gravity of the situation. The information has been given to the lawyers who are directing the criminal complaint.

It seems that a commitment to municipal obscurantism has been implemented by the Town Council. The last minutes of the Governing Council (the body that grants licences) can be consulted on the web is for 19/04/21. For 7 months it has not been possible to know what agreements have been made in this regard.

This refusal to allow consultation of the Son Bou files, as well as the refusal to allow the consultation of the files for the case of the Torre Vella agro tourism hotel where seven illegal swimming pools were found, has motivated GOB to initiate criminal proceedings against the political and technical people responsible for endorsing these decisions. The finance required for this legal initiative has been raised by many contributors.