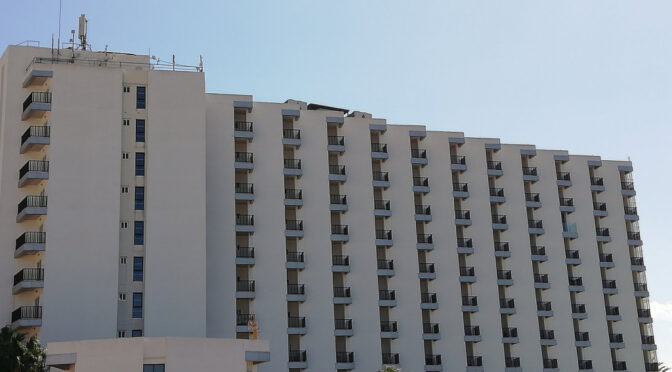 The refusal that you have accorded to those wishing to consult the dossiers for the Son Bou Hotels and the illegal swimming pools at the agro tourism hotel of Torre Vella has become very controversial. Recent statements made regarding these hotels require some clarification.

There are few buildings to be found as unfortunate as the two towers that spoil the view of the most extensive beach of Menorca. Their impact is that inherited from before democratic times. It was a mistake that one day we were hoping to correct.

In 2017 the Meliá company presented a proposal supposedly for a “modernization” project, that kept the height of the enormous edifices of the hotel and proposed a growth sideways for the two constructions (while expecting tourism of the all-inclusive type). One month later, GOB asked to consult the project presented to the Town Council.

On that occasion, there had been no problems for exercising the right for access to a dossier that had started with the documentation of the company, because different laws exist for accrediting an entity such as ours as an interested party for this dossier.

However, GOB found a problem with the hotels and that was that the size of the structures had never complied with the conditions of the licence in the seventies for the size of the plot. It is shocking that it has to be a non-profit making association that discovers something so basic rather than the Department of Urbanisation. In fact, we put in writing a warning about this and other deficiencies.

That must have caused a lot of anxiety to the promoter since a construction built without complying with the licence is illegal and, moreover, cannot be modernized without first becoming legal. This supposing that it can be legalized with current regulations.

Nevertheless, this uncovered a situation of legal uncertainty that also opens a door for Menorca allowing it to redirect an impact as outrageous as that of the hotels. That was what we expected to see the Town Hall would do with a view to defending the general interests of the island.

Furthermore, the municipal reaction has been to impede GOB from being able to see the new documentation presented by the promoting company. While keeping it under lock and key they have given the licence to regroup the plots; and that will be the subject of the next article to be published because we want everyone interested to know the details.

The argument for not allowing access to the documentation cited is that it is not possible to show the file until it is finished. Forgetting that interested parties should have the ability to comment before the resolutions are made (as stated by the Constitution and its supporting laws.)

It now seems strange that we are directing proceedings against the Town Hall on these matters. It is unnecessary to be reminded that urban planning is a municipal responsibility. They certainly know when they have granted a licence for regrouping of plots.

Few people would believe that this sudden change of criteria for access to documents could be a technical question. It is certain that most people do not expect GOB to have to write a letter relating to the new documentation before a licence is granted.  Others may be thinking that the Town Hall assumed that GOB accepted the earlier facts, with the hope that our association would not have the ability to react.

GOB was created 44 years ago in Menorca and has coexisted with governments of all political colours. Until now, it has not been necessary to use criminal proceedings in order to assert the legal rights of citizens. We would much rather dedicate our efforts to other causes but we cannot stand by while we see what is taking place by a public institution. It is you, as you have shown by your letters with official headings, that has constantly denied other practices.