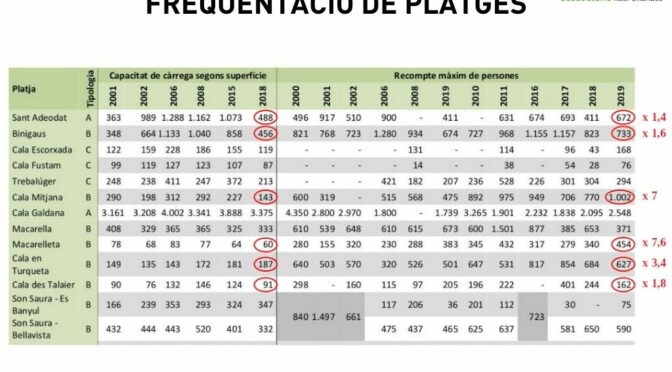 This article, accompanied by a corresponding video, is about the problem of tourist overcrowding that takes place in Menorca. Talks have been given about the saturation of the beaches and other places, aggravated by the presence of vehicles.

In 2021, the most emblematic beaches of Menorca to the south of Ciutadella closed their full car parks at 7.30 in the mornings, which gives an idea of the infinite demand generated by the best-known unspoilt beaches. At Binimel·là, for example, one could count on a row of vehicles parked on the access road (the car park already saturated) for nearly 4 kilometers.

What is saturation is often subjective, and so GOB aims to put together available concrete data to make the most objective assessment.

For example, the report of 2019 prepared by the Socio-Environmental Observatory of Menorca has a system of indicators from the island PTI and shows the level of frequency to Menorcan beaches. Given that the beaches have a certain area, it is possible by giving the users a parameter of 2 square meters to define its maximum capacity.

We are able to verify how the capacity of Cala Mitjana was 7 times higher than it should be. Really outrageous. Macarella was 8 times above its capacity. Cala en Turqueta, was about 4 times.

This enormous overcrowding of the emblematic beaches causes two highly negative consequences. First, it generates disillusionment in the most sensitive tourism that comes to Menorca attracted by advertising that always shows our coast with very few people. Second, the huge pressure endured for many weeks produces environmental degradation on fragile areas.

In GOB’s opinion, it is urgent to reduce extending some of the car parks because people think that when car parking is available then there is space on the beach. In the case of Cala Mitjana, it is clear that the car parking made available in 2013 was much greater than it should have been.

The avalanche of people and vehicles has also been seen at the lighthouses. Punta Nati and Cavalleria have seen daily traffic jams due to the number of people who go to see the sunsets. In this sort of area, it is not feasible to make car parking for such a multitude. The solution ought to be the same as has been applied to Favaritx and Macarella.

At least during the months of July and August, these highly sought out places need to be managed before they die of success. Avoid private cars and make public transport available is a solution that works well in the island and has been applied for years in other places with heavy visitor pressures, such as at some of the natural and national parks. The visitor experience gains more quality and the natural values are preserved.

The lighthouses, Cala en Turqueta, as well as Cala Galdana (where much of the parking is occupied by company workers leaving no space for the clients) are areas where there should be well-organised communal transport.

Another important consideration is the possibility of limiting the number of vehicles that can come to the island. This has been happening already for the last two years in Formentera that recorded very large problems with traffic jams. A law was approved that permitted its Island Government to be able to decide each year on the number of vehicles that could exist on the island. Logically, priority is given to residents, public services and similar, but with the possibility of limiting those that come by sea during the summer.

This is a possibility that could be very useful for Menorca and should be included in the Reserve of the Biosphere Law that is being put together by the Island Government to be sent to the Balearic Parliament.

In conclusion, reduction of parking lots for saturated beaches, making collective transport for areas that cannot manage parking areas, and a legal ability to control the number of private vehicles that operate on the island, are some of the proposals for finding real solutions to the problems that are now affecting the quality of tourism and of the Menorca experience. You can see all the considerations in the short video attached.

We invite you to disseminate and help us with these proposals, as well as thinking of other ideas that could be helpful in preserving this island that we love.