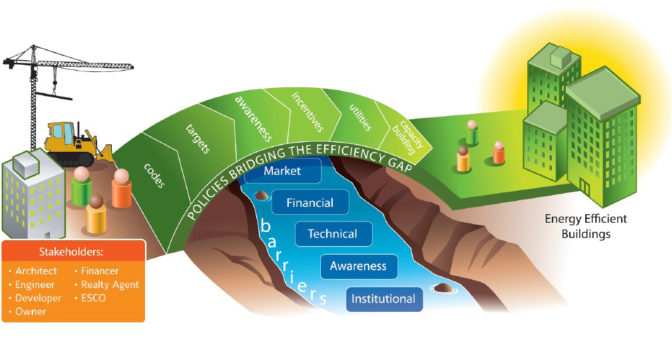 Recently, there has been some controversy, reported in the Menorcan press, concerning requirements for energy efficiency and water consumption in new buildings. The issue began with a memo from the College of Architects and the discussion continued at a meeting of the Mayors with the Island Council however, the information released by the press seems to be more of a complaint than a solution to the proposals.

Energy and water are already very important in today’s society and will become even more so in the immediate future. These issues need to be addressed without further delay. There are also indisputable regulations that cannot be ignored even though they imply having to change the way things are done.

Eleven years ago, approval was given for the Directive 2010/31/UE concerning energy efficiency of buildings. This mandatory text reported that already 40% of European Union energy consumption corresponded to that for buildings.

The Directive was made Spanish law by Royal Decree 235/2013. It establishes that new buildings, from 31 December 2020 will have nearly nil energy consumption (publicly owned buildings from 31 December 2018). Current legislation also states that almost zero or very low energy required must be supplied to a large extent from renewable sources produced in situ or environmentally.

Therefore, the demand for new buildings with high-energy efficiency is not some whim of the Island Land Planning, as some people have been saying, but derives from the mandatory legislation that was announced some years ago.

It should be remembered that renewable energy can replace part, but not all, of oil based energy. The repayment for renewable energy is much less than that of oil, which is becoming scarce and more expensive. We have to reduce our rate of consumption for which buildings represent a very high percentage.

Adaptations are needed, not delays

To argue that few buildings comply with the requirement of maximum efficiency, when the obligation has been in place for only four months, does not seem to be much of an argument. Nor is it that town planning does not take account of this, because it is quite normal that new rules take a while to evolve and planning to adapt.

It does not seem reasonable that there are town planning rules that prevent the installation of solar panels on roofs in places where they are not seen yet there can be television aerials, air conditioning condensers, or chimneys of all kinds. The reason is simply that when these standards were drafted, photovoltaic modules were not common (though the other apparatus listed was).

Eliminating the requirement of energy certification and substituting it with accreditation in sustainable building, as is also discussed these days, is now seen to be a breach of an obligation that does not depend on the Pla Teritorial Insular (PTI). It seems more logical to debate on how to comply with European and state regulations so that the costs and processing time will be less affected rather than asking Menorca to ignore the validity of legal texts.

Water, a basic guarantee in danger

The history of the last 40 years in Menorca has shown how spectacularly we have lowered the water reserves of the aquifers and how we had to build a desalination plant in Ciutadella that cost millions of public money and would be a source of conflict as much for the implied increase in energy consumption as for the constant discharges of brine into the sea.

More recently, cases have appeared where authorization has been given for significant increases in building for tourism with approved planning permission yet the water supply companies have had to advise that the forecasted consumption would not be possible. This is a reality in Menorca. There are municipalities where, in the pre-Covid years, there were public wells pumping for 24 hours without reaching any water.

The solution is not to make more wells (that take from the same aquifer) nor to put more desalination plants (that make private benefits at the cost of the environment and to the public treasury). The solution is to guarantee that the new increases will add almost zero water consumption, by taking advantage of collected rainwater, purified grey water and treated wastewater. The solution is to make sure that before authorisation is given for new growth, there are guarantees that go beyond the mechanisms that have failed repeatedly.

Public institutions must provide solutions, not shy away from awkward debates nor hope that the problems they encounter will be dealt with by those who succeed them. The problem of water on the island cannot be postponed. If the official reports are slow, what matters is that they must be speeded up and not suppressed.