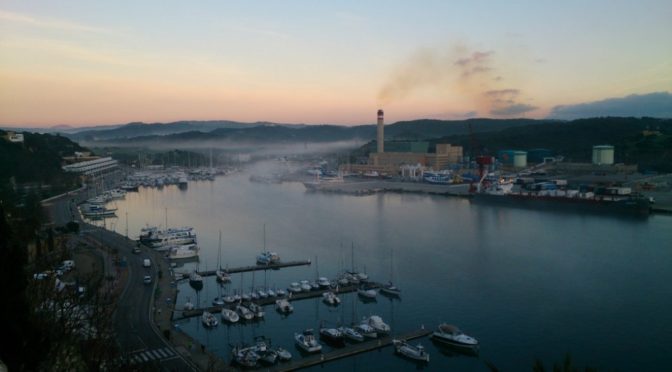 The loss of the electricity connection between Mallorca and Menorca due to the breakup of the cable found to be in bad condition, gives us a scenario worse than anything we have had until now. It means that the two islands could cause even more pollution from energy production than before so it is urgent that the public and institutions react and demand clean energy.

The Central Power Station is the origin of up to 60% of the polluting emissions in Menorca. However, until now, we have been receiving 15% of the total electricity consumption by cable, which comes to us from Mallorca with any surplus shared between the two islands.

Now electricity will have to be made here and since the Central Power Station production is so inefficient, the implication is that a higher proportion of energy must be generated.

Last December GOB sent to the Balearic Government a written statement detailing possible failures in the functioning of the installations. The Government has already announced that it will open a dossier of sanctions, because, amongst other things, in 2016 it functioned without any emission controls for 7 months.

GOB is sending letters to the Government asking that an emissions monitor is installed for readings to be available to the public (the company obtains and manages its own readings). This will mean that anyone would be able to check at that moment, the level of emissions of each worrying substance.

The necessity for renewables

Menorca generates less than 3% of its electricity from renewables. With the rest of Spain, it is suffering from the curbs that the Central Government has imposed on clean energy production.

On other occasions it has been shown that producing kilowatts on this island with imported fuel is much more expensive than renewables. Nor are we talking about the enormous environmental difference of the two sources.

For these reasons, we at GOB believe that we have come to the point that our organisation confronts the Central Government and demands that Menorca is treated in a separate way concerning energy, because it is an island and because it is also a Reserve of the Biosphere.

Gas in a transitional period at the Central Power Station

While there is no significant advance in technology, the Central Power Station will continue to be needed to produce energy without the availability of renewables. For these reasons, GOB favours changing the current fuels (gas and gas oil) for natural gas brought in by boat. Only with this change could the levels of carbon dioxide be reduced to 30% and the sulphates and particulates reduced nearly totally.

It is considered very important to put new investment into the Central Power Station in order to set it up for this new direction which would be very beneficial environmentally as well as being easily amortized because of the difference in the costs of the fuels.

Nitrogen oxides (NO and NO2) are usually produced when air and fuels are in contact at a huge temperature (above 1,200 degrees). Then the nitrogen in the air (some 78%) binds with the gases causing a highly negative effect to health. The nitrogen oxides, therefore, are not dependent on the fuel but from the form of combustion.

The technology for injecting water and other alternatives

To confront the NOx emissions, which already are above the maximum permitted by European regulations, Endesa is proposing to raise a large quantity of water from the sewage purification plants in Mahon and Es Castell (95,000 cubic metres). The injection of water would lower the combustion temperature and lower the level of nitrogen oxides. But the problem of this idea is how to carry the water from Es Castell to the Power Station in Mahon. A large work which has the restrictions of any work of this sort.

Perhaps Endesa ought to study, also, the option of installing existing technology which allows taking oxygen from the air and making the combustion only of oxygen. With no contact with the nitrogen molecules, there would be no gases of NOx produced and the work to be done would not be so complex.

It is said that the most ecological kilowatt is that which is not produced. Menorca also has a long way to go in this field. The energy savings applied to buildings, to insulation systems, by the general implementation of solar panels for heating water and other efficiency methods, can produce enormous savings, and are reflected in the reduction of emissions.

The mistake of piping gas to houses

The possibility of using gas in the Central Power Station has nothing to do with the project that the company, Gas Natural, is trying to promote in Menorca. This consists of constructing a huge network of pipelines for all the island (more than 500 kms of ditches) in order to pipe gas to houses.

This work, in the air from forty years ago, is being promoted without any market study to find the benefits. In fact, if gas were piped to all the clients that the company expects would be interested, the savings in emissions would be only 1.6%.

On the contrary it is easy to foresee that a work as ambitious as this, after penalties are applied to other alternatives, would oblige the consumption of gas and in that way be able to amortize the operation.

Help us to rationalise the energy problem

This year is the 25th anniversary of the declaration of Menorca as a Reserve of the Biosphere. The transition for cleaner energy cannot be allowed to continue being delayed. Help us to make it possible to improve the situation. Help with the campaign which we are making to control the emissions from the Electricity Central Power Station.