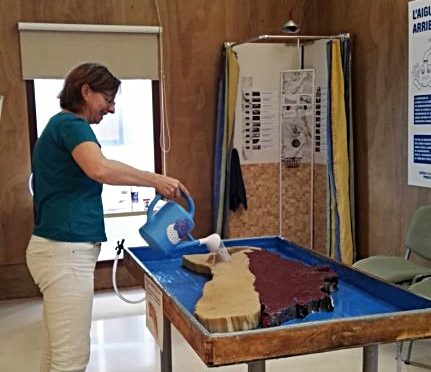 There is an exhibition in the conference and exhibition hall of the Molí del Rei (GOB´s centre in Mahon on the Camí des Castell, 53) on Water in Menorca. This exhibition is made principally out of reused materials to give an explanation of the state of fresh water in Menorca.

By various interactive means, such as the model of an aquifer, or a problematic shower, amongst other things, the visitor can look into the origin and causes of the water problems of Menorca and will be able to consider essential aspects of the issue.

Studies which have come to public attention in the last few years show the grave problem which now confronts Menorca in respect of its fresh water aquifers. The exhibition demonstrates the result of marine intrusion with chlorides because of the excessive extraction of water which has provoked sea water to enter and salinate the aquifers. It also shows how they can be compromised such as the Migjorn aquifer which now has a higher content of nitrates than is allowed by health regulations for drinking water.

This exhibition is part of the project “The Water in Menorca” which is supported by the Ministry of the Environment, Agriculture and Fishing of the Balearic Government. The exhibition also endorses the educational activity “Water is life, what do you know about it?” which is offered to schools and is brought to life by an instructor during the school year 2016/2017.