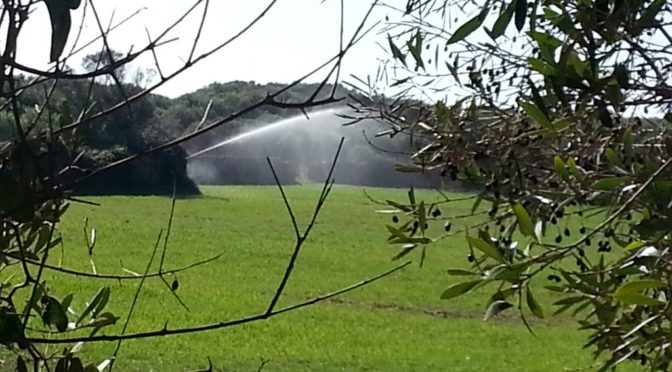 GOB has asked to be able to consult the files on the three irrigation systems which were reported officially this summer in Menorca. This initiative was to end the lack of control on the extraction of large quantities of water from the aquifer.

This year it was recorded that there had not been any inspections to see if the irrigation systems of the large farms made use of water meters as required by law, and if, moreover, the obligatory extraction data was sent to the Directorate General of Water Resources.

The aquifers have not recovered in this decade despite higher than average rainfall, which indicates clearly that very large extractions of water are being made. This year, however, has been much dryer with little rain and a summer without a drop of water. If we are entering a cycle of drought and we do not change our behaviour, the aquifer will not last many years.

There are a few farms with extensive irrigation systems that, furthermore, habitually water in the hours of direct summer sunshine. This water is allocated for business, and not as an essential for life, nor for hygiene, yet it is completely free. In the opinion of GOB, the rational management of water ought to start by control of large consumers, including urbanisations where usually there are houses with large lawns.

The law expects systems of control but if the obligations are not monitored, there is no point in having laws.

To make sure that the ministry concerned and its respective officers do the assigned work, GOB formalized the charges against three irrigation systems being operated last summer. It has now made use of the rights available to associations to be able to find out what actions have been taken to place the matter in front of the Department of the Environment of the Balearic Government.

This is to check whether or not, as a result of the written complaints, the inspections have been made and corresponding action taken. It is to see if the necessary technical information and legal requirements have been issued and whether or not there is any basis on which sanctions should be made.

A reply is expected in the next few weeks.