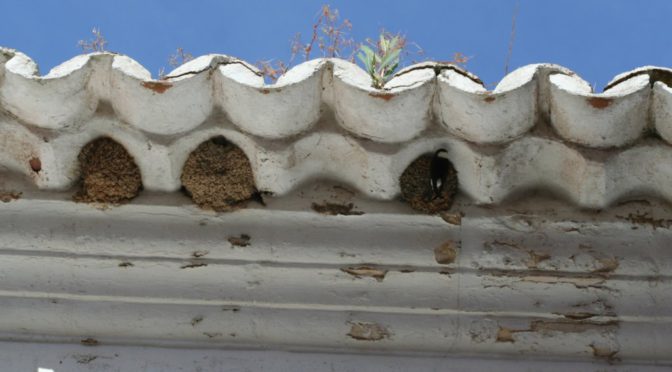 GOB is worried about the destruction of the nests of house martins which can be observed at this time of the year in the villages of Menorca. The Regional Ministry of the Environment of the Balearic Government and the local Island Government have been asked to start a campaign to give information on the benefits of these birds and explaining the legislation that prohibits the destruction of their nests which results in heavy penalties.

The house martin (Delichon urbicum), a member of the swallow family, makes its nest of mud in the eaves of roofs. Along with the swallow it is seen typically in the sky over villages and towns in summer. It is beneficial because, in flight, it catches large quantities of insects. It has been estimated that each house martin consumes some 55 kg of flies and mosquitoes each year, the equivalent of some 310,000 insects. It is, therefore, a very effective and natural form of ecological insecticide, compensating for the small nuisance their nesting causes but which some householders use as a reason for destroying their nests.

House martins are protected by law and destroying their nests, even if in the summer, is regarded as a grave infraction, with fines between 5,001 and 200,000 euros. We think that this is not generally known. Therefore, we consider that all levels of government, district councils, local Island Government and the Balearic Government, need to concern themselves with this problem, first of all by an information campaign, and then by enforcing the regulations.

GOB believes that people who value the conservation of the urban biodiversity pass on a cultural sensibility which needs to be encouraged on an island such as Menorca with its environmental recognition. However, destroying nests gives a negative message contradicting the values of a Reserve of the Biosphere.