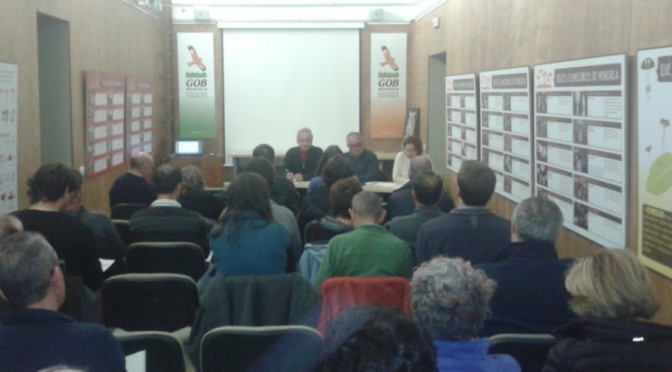 On 21 December, 2015, a general meeting of the members of GOB approved the summary of its activities carried out during 2015, the budget for 2016, the composition of the new board, and unanimously re-elected Jaume Obrador as its President.

The number of members of GOB Menorca is still increasing having reached 1,314 this year. The members provide the main support which enables GOB to be independent and to work with the objective of making human activities and the economy compatible with the preservation of the environment and its natural resources. Inestimable, also, is the contribution made by the volunteers who give their time for helping to make projects viable such as at the Recuperation Centre for Wild Animals or at Es Viver the GOB nursery garden for Menorcan plants.

The work of GOB during 2015 has been kept at a high level, as can be seen in the published list of activities, too numerous to mention individually. They can be found here in Catalan (a volunteer to translate this for the English website would be much appreciated) and despite a very tight budget. Questions such as the reconstruction of the main road, the uses of water and energy as well as climate change have particularly concentrated GOB’s efforts in local politics. We now have 27 Land Stewardship agreements with agricultural farms in Menorca. The environmental education programme with schools has reached some 1,450 students. We would like to be able to increase our activities even more, but that depends on greater resources.

The meeting approved the budget for 2016 of 338,000 euros. This is higher than 2015, but far too low to be able to carry out our projects as we would wish. So, it is necessary to have even more members and to ask for people to help with campaigns such as the sponsorship of the Recuperation Centre.

The meeting also approved the composition of a new island board, composed of 24 people. The President is Jaume Obrador, and the rest of the members are Bosco Febrer, Jara Febrer, Xavi Camps, Maria Cardona, Biel Carreras, Carlos Coll, Iñaki Cucarella, Joan Florit, Eduard Furrό, Alba Garcia, María Giraldo, Luís Llorca, Mar Lluch, Jerόnimo Marqués, Maite Martínez, Begoña Oquiñena, Pepa Orfila, Laura Piris, Begoña Piqué, Jacint Prieto, Magda Seoane, Santi Udaeta and Louise Watson. These are professional people of a wide age range who will dedicate their time volutarily on behalf of GOB during 2016. We believe that with the help of the rest of the members, volunteers and our many sympathisers, we will be able to do a great deal of challenging work this year and which we are on the point of starting.