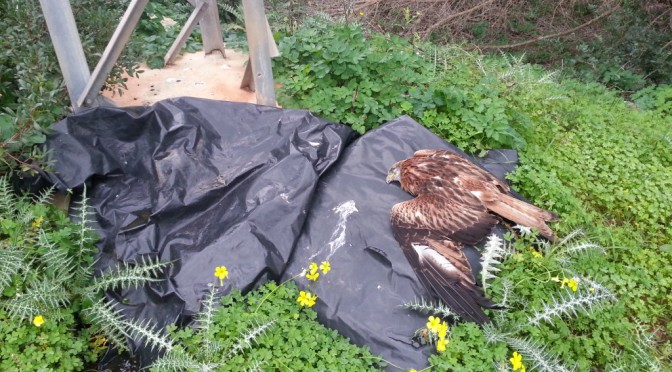 Two dead red kites have been found recently at the foot of a pylon. GOB has sent written requests to different institutions to ask that a solution be found for this problem which has been known for some twenty years.One red kite was found at the foot of a pylon in an area near the Cami d’en Kane. The design of the pylon, with high uninsulated connection cables, has been proved to be of great danger for larger birds. Indeed, a second kite was found in the undergrowth at the foot of the pylon which had been dead for some time.

The Red Kite (Milvus milvus) was one of the most representative of Menorcan birds until the end of the eighties. GOB incorporated it into its logo preciesly because the silhouette of this bird flying tranquilly was a recognised part of the landscape of Menorca. But of the 135 breeding pairs which were surveyed in 1989 there were only 27 in 2014. The Balearic population of this specie is catalogued as being in danger of extinction. However, its chance of survival would be greater if the reasons which caused the sudden drop in numbers were acted on. Poisons, electrocutions, and less available food (especially rabbits whose population is so affected by desease as well as being hunted, and dead cattle which are now burnt) are the most notable causes of the decline.

The problem of electrocution was detected in Menorca more than 20 years ago, when GOB carried out a field study which found hundreds of dead birds at the foot of electric pylons, among them red kites. As a result of the public complaints made of the situation, Gesa (the electric company) and the Balearic government initiated a special insulation programme and a study of the species.

So, it does not seem reasonable that, twenty years later, there are still pylons designed with the potential to electrocute and which continue to kill the red kites. GOB has recently sent reports to public institutions (The Government, the Island Council and the Town Council) as well as Gesa-Endesa, asking that they all act to insulate the pylon in question, and to insulate the rest of the pylons on the island as well as making changes to the design of the pylons.

Pylons which cause the most danger of electrocution are those which have cables higher than the pylon, that are not insulated. When cables are lower, the risk of electrocution is less probable. With this in mind, it is interesting how everyone who goes into the country notices nearby pylons. If there is a high cable it is worth looking at the base to see if there are any dead birds.

If there is a dead bird it should not be touched. This is restricted to either the Environmental Agencies or Seprona (Guardia Civil). Take photos and especially make clear geographical references to explain where to find the pylon. If you pass on this information to GOB they will put into action the established procedures.