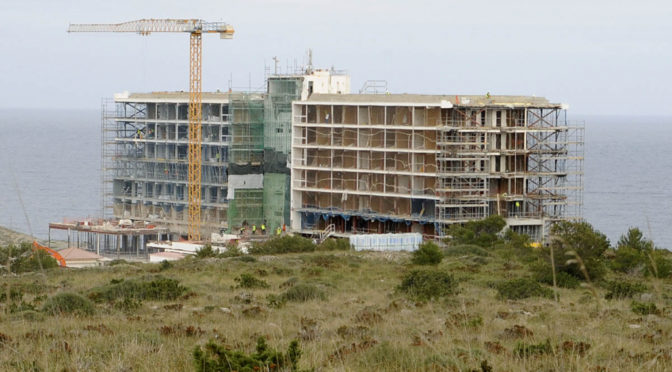 The argument relating to the conditions that ought to exist for large hotels when they become out of date covers many similar examples. A project has been presented at Arenal d’en Castell that is inappropriate for the 21st century having no environmental parameters nor does it have any intention, even, to connect to the new water treatment plant. This is as a result of making rules a la carte that are not in the general interest.

The Mercadal Town Council made public on its web page the restoration project for one of the hotels constructed in the seventies and that now has structural problems. It was also recently published in the BOIB.

The company, belonging to the Matutes family, announced that the hotel was closed and that they were opting for a good structural reformation to raise the quality of the hotel. They started doing some urgent work to deal with the structures but stopped because the workers complained that they had not been paid for some months. It was then found that some interior restoration had begun without any licence.

GOB has consulted the public announcement that contains various points that make this development questionable.

The project as presented does not make use of the activity in order to improve the environmental conditions of the installation. It is not proposed to make use of rainwater, nor to incorporate renewable energy, nor is there any effort to avoid the use of polluting materials during the reformation, nor is there any plan to reduce the impact on the landscape of the building…

Moreover, there is an effort to reduce employment yet increase the quality of what is on offer. In fact, the project presented is to work on providing for 528 tourists when only 501 are authorised. It remains to be seen, therefore, if these additional 27 places are viewed as increased capacity, when, therefore, they would not be covered by licence, and not be within the agreed planning permissions and so would require a fresh application process.

In addition, the matter of parking in not very clear. The project shows a capacity for 42 parking spaces, yet the previous conditions for the current hotel gave a capacity for 101 parking spaces. Analysis needs to be done to see if this was dealt with at some point and if the space originally meant for parking has been used for other purposes not covered by licence.

The above mentioned environmental shortcomings of this project certainly emphasise the fact that connection to the sewerage network is not included so that sewage (estimated at 123,500 litres per day) will be treated in the new purification plant constructed in the area.

The project envisaged its own treatment plant but did not clarify where the purified water would end up. Bearing in mind that the Arenal d’en Castell urbanisation has been managing its sewage with the overflow leaving by Calesmorts (to the east of Punta Grossa) and with a filtration cesspool situated one kilometre off the coast near the Son Parc urbanisation, GOB is asking for an updated authorisation to be submitted to see if these precarious systems can still be operative.

In conclusion, and in GOB’s opinion, this is about an initiative that intends to enlarge a model inherited from the seventies to last another fifty years and which is inappropriate for the 21st century at a time when the policy is to find a way of reducing impacts on the landscape and to seek an environmentally friendly economy.

When specific cases are known the need is better understood for putting into place exacting rules for allowing the evolution of tourist facilities for buildings that were originally constructed at the beginning of the tourism era on this island.

For these reasons, the provisions made by the recent Decree of Urgent Measures of the Balearic Government on the Tourism Law are very disappointing. They exempt the old hotels from the requirements that should be applied to any comprehensive rehabilitation work. This is the best way to lose the evolution train.