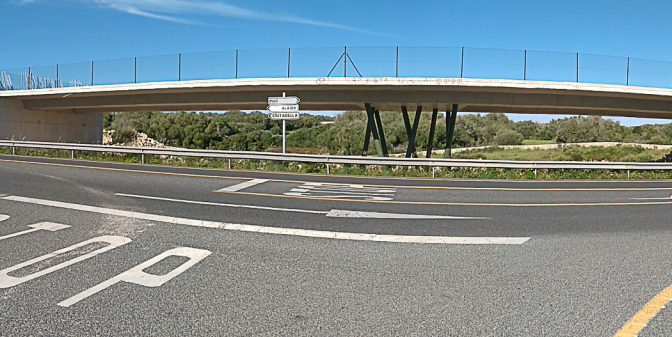 The recent announcement by the Consell Insular (the Island Government) to maintain the half built bridge at l’Argentina and to demolish the one at Rafal Rubí, was received by GOB with scepticism and concern. It is essential to have coordinated and urgent action between the departments in order to resolve the problems adequately.

It is five years since the road works between Mahon and Alaior stopped because of the controversy concerning the junctions of l’Argentina and Rafal Rubí. Since then, the political will to eliminate the constructions has not translated into reality.

It should not be forgotten that the original contract for the road between Mahon and Alaior was chosen from between 17 different proposals presented in 2012 with technical criteria that did not include any double level roundabouts. Political pressure caused later arguments on structures. The environmental reports that were issued during the application process clearly warned against any out of proportion constructions that were not deemed justifiable.

The public response against this model for the road, incorporating a double level roundabout every 2.5 kilometres, was very important. As on other occasions, it was about the struggle for a design suitable for this island that was wanted by the Menorcans. The pressures to make a dual carriageway came from the political party, which was, at that time, in power in the Consell Insular and the huge roundabouts were the first steps when budgets affected by the economic crisis did not allow for the direct building of a dual carriageway. The works had already begun at Argentina and Rafal Rubi when there was a change of government in the 2015 elections.

From that date, there has been government unity against the two half-built bridges, but it has run into problems because the demolitions ought to be signed off by the same technicians that validated their construction.

Therefore, the problem is not a lack of viable alternatives nor ones with small impacts on the landscape (in the section between Ferreries and Ciutadella, road junctions have been built at the same level as the road, without bridges, at Ets Alocs, Son Sintes and at the Es Tudons naveta). Nor is there an economic problem, because the demolition of the bridges does not have a significant cost if it is taken into account that the construction work planned for Biniai will not take place. The problem is that the technicians who are to sanction the demolition work are the same as those who approved the need for the huge roundabouts.

The Autonomous Community recognises by the recent law, Decreto Ley 8/2020, the full application of the  European Convention on Landscape, which explicitly states that significant impacts on the landscape must be taken into account on any road works now or in the future including those that are awaiting approval or have already started.

It is clear that the main road constructions between Alaior and Mahon are in conflict with the landscape. For that reason, the announcement for maintaining and finishing the bridge at l’Argentina, before knowing the assessment of the effects on the landscape based on the legal regulations now in force, is worrying. The junctions of Biniai, Rafal Rubí and l’Argentina were the ones that motivated public protest, because they were in the countryside and did not warrant double level roundabouts. They were not needed before nor are they needed now.

The bridges are a lasting memory of a time when immoderate building caused a huge and unjustified expense to the public purse, which was accompanied by enormous corruption.

Society’s expectations are now different. This is at a time when it requires transparency in a new concept of development. Where honesty with the public accompanies decisions that show a clear commitment for sustainability and do not continue with outdated methods. It will be necessary to follow in detail any steps that are going to be made.