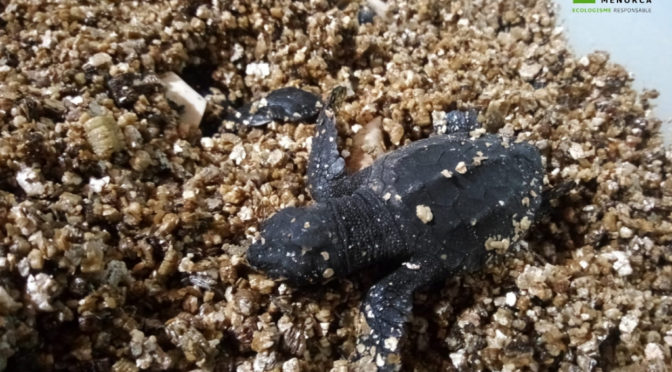 The laying of the eggs by a marine turtle on a Menorcan beach has been one of the events of this summer. Both the management of the spawning and of the young that now, happily, are hatching, have produced many questions from the public. We will try to answer them.

The rise in temperatures that we have been experiencing in the last few decades is causing the marine turtles that historically have always bred in the Eastern Mediterranean, to look for new breeding areas in the Western Mediterranean. This has led many government ministries, amongst them the Ministry of the Environment of the Balearics, to make studies of the temperatures of various beaches on the islands.

Not all beaches are the same, as we islanders know. Due to the composition of the sand, some warm up more than others do. The incubation temperature of the turtle eggs is very important, not only will it influence the sex of the young but also a too low temperature (less than 26°C) does not allow the embryo to develop.

This explains why the majority of the eggs were moved from Punta Prima (where the sand is so white it reflects the sun and does not hold sufficient heat) and taken to Sa Mesquida, which was the nearest beach that better meets the required conditions. To be able to compare the development, and increase the possibility of hatching, many eggs were taken to incubators at the GOB Wildlife Hospital in Ciutadella and the COFIB in Mallorca. It had to be borne in mind that a beach can also have problems, such as flooding due to rain, bacteria contamination, temperature decreases, etc.

If the original nest had fewer than 60 eggs, all of them would have been taken to the incubator, because a part of the incubation depends on the metabolic heat, which requires a minimum number of eggs to produce it. As was expected, the first births were from the incubators, because they kept the conditions of temperature and humidity constant. Little by little, always at night, more are hatching out on the beach.

The impact that humans are having on the sea is gravely affecting many species. Plastics, chemical contamination, the noise of boats, the increase in temperature, fishing gear, both controlled and uncontrolled, are some of the unnatural causes of the deaths of thousands turtles and other animals each year. It is essential to create an active conservation policy as soon as possible to try to remedy thousands of casualties.

This also explains why the newborn turtles are not set free into the sea as would happen if the species were in natural conditions. The studies made estimate that 90% of turtles die each year from either natural or artificial causes.

The turtles that are coming out of the nest will be taken to special facilities where they will be monitored and fed during their first months. Depending on the quantity, they will be distributed between the aquariums of Palma, Andratx and Valencia. After they have reached the recommended size and weight, they will have a period of adaptation and be liberated in Menorca.

This same programme was applied to turtles that were born last year in Ibiza, and apart from the high survival rate (more than 90%), in less than one year, the turtles weighed nearly 2.5Kgs each. A success rate they would not have achieved if they had been left alone from the beginning.

From GOB we would like to thank the dedication of the numerous volunteers and the organizations that have taken part in watching over the nest on the beach. We would also like to give our sincere thanks to all the people who remove plastics from the sea, who fish responsibly and so help in stopping negative impacts on the sea.