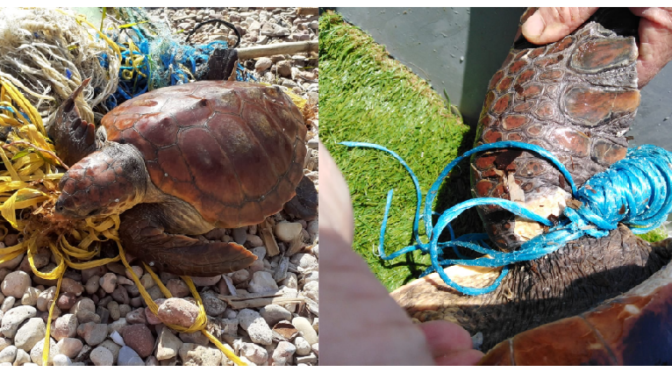 If we find a marine turtle tangled up, we must not free it. We need to let 112 know. The turtles need to be disentangled by a vet to avoid complications, which can be very serious. Even if we see that it is in a distressing position, we must not do anything with it, because that could make it worse. It is very gratifying to know that many people have been concerned about the turtles they have found in a bad state and tried to help them by releasing them but it is not the correct way of going about it. These turtles may not survive because of later complications if they have not been checked by a specialist. What has to be done is to contact 112 and follow their instructions.

It is not known if this year is unusual, but during last summer, the Centre for Recuperation of Wild Animals in Ciutadella took in two turtles with problems, but already this summer 14 have been admitted that have been entangled or have other problems.

First of all, we should know that marine turtles are animals that avoid any interaction with human beings, so if we find a marine turtle on the surface of the sea and it is caught, it usually means that something is not right. However, our first instinct, and acting in good faith, is to try to take off the plastic from a flipper or untie the cord that has gone into the mouth, but we may, unintentionally, be condemning this animal to certain death.

Take as an example a turtle with a plastic cord wrapped around a flipper. As we do not know how long the cord has been tightening the limb, it is possible that it has suffered a necrosis (death of the tissues of an extremity) owing to the loss of blood flow. If the cord is removed the coagulated blood, or blood contaminated by some infection in the constricted limb, could enter into the blood stream and cause the animal’s death within a few hours.

Another occurrence we may come across is that of a turtle with a thread or cord coming out of the mouth or anus. Why is it important not to touch these? Firstly, because at the end of a cord, there might be a hook which in many cases could break off part of the digestive tract of the animal. Furthermore, a little known fact is that marine turtles have an oesophagus covered with small spikes (spicules), facing towards the stomach to prevent them releasing their prey back into the mouth. Pulling on some foreign body, such as a cord or some other plastic that might be stuck on the spikes could break the plastic even more. If pulled too hard, the spikes could break.

On the other hand, taking the turtles to a recuperation centre, such as the Palma Aquarium, means that detection and treatment can be given not only for the removal of the plastic but for any other infections such as pneumonia, dehydration or intestinal obstruction.

To avoid further injuries to these unique animals on the list of vulnerable species, if you find a turtle tangled up, hurt or caught, leave it alone but: